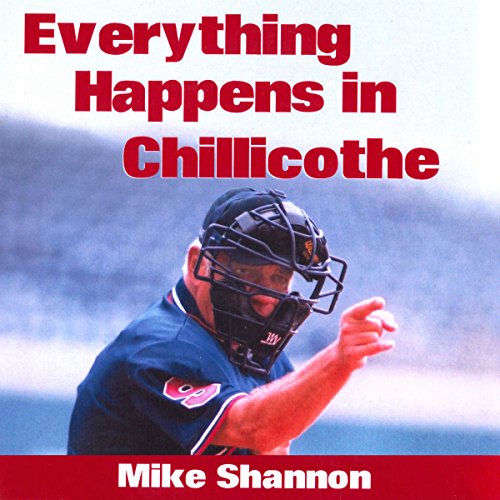 Everything Happens in Chillicothe

A Summer in the Frontier League With Max McLeary, the One-Eyed Umpire
By: Mike Shannon
Narrated by: Eric Jason Martin
Length: 19 hrs and 38 mins
Categories: Biographies & Memoirs, Sports
4.5 out of 5 stars 4.5 (8 ratings)

Everything Happens in Chillicothe

"One thing about Max was that he was about as well-adjusted to his disability, if you want to call it that, as anyone could be... He even used his eye once to shut up an obnoxious high school coach. After he'd heard all the complaining he wanted to hear, Max took his eye out of the socket and handed it to the stunned coach, saying, 'You want to umpire this game? Here, be my guest.'"

Everything Happens in Chillicothe is an authentic, behind-the-scenes look at the lowest rung of professional baseball, and a biography of Max McLeary, the one-eyed umpire and a most intriguing individual. Author Mike Shannon spent the 2000 Frontier League season attending games with McLeary and gives his account of the season here. The audiobook speaks volumes about umpiring as a profession, relationships (particularly between Max and his estranged son, a minor league player; between Max and his long-suffering wife Patty; and between Max and his umpiring partner Jim Schaly), life in small-town America, and the various people connected with the Chillicothe Paints and other teams in the Frontier League. Many humorous and poignant stories, are told here for the first time, by McLeary, Schaly, and others.

An Interesting Telling of a Fun League

If you could sum up Everything Happens in Chillicothe in three words, what would they be?

The time we spend with Max McLeary is a good story. The time we spend just at the game is not as good. The story went from spending time with the one-eyed umpire to spending time with the league, especially during the time where he was working games outside the Frontier League, to the story of a couple of players the author liked on the teams that were close to home.

What got Mike Shannon going on Max McLeary in the first place was when Max had a foul ball go into his mask and break his nose. The story surrounding that encounter with the medical assistant looking for a concussion in the glass eye was humorous.

The story of the Frontier League season is an interesting one where they have characters all around. This story is about Mike Shannon's time travelling sometimes with Max McLeary, the one eyed umpire, and sometimes by himself to go get more of the story through a regular season of the Frontier League, an independent baseball minor league. The stories of Max McLeary are very good and there are some real gems where the story talks about awkward situations that coaches and players go through when they realize the umpire behind the plate only has one eye. This story goes from a lot of game stories, more game summaries, to a lot of drinking at the local bar.
The narration of this story is done well. He sounds like a reporter giving a story which is what the story is. Overall it is a decent story but Max spends too many pages away from the book.