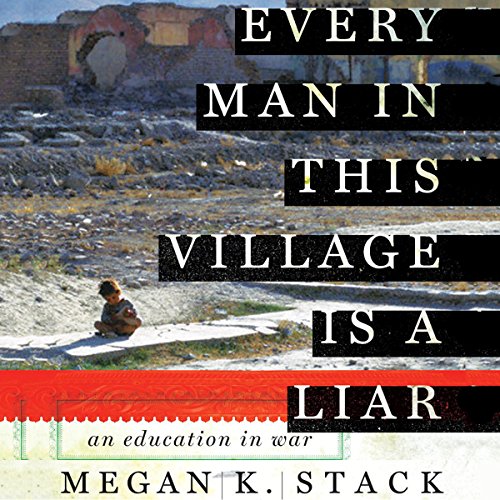 Every Man in This Village Is a Liar

A shattering account of war and disillusionment from a young woman reporter on the front lines of the war on terror.

A few weeks after the planes crashed into the World Trade Center on 9/11, journalist Megan K. Stack, a 25-year-old national correspondent for the Los Angeles Times, was thrust into Afghanistan and Pakistan, dodging gunmen and prodding warlords for information. From there, she traveled to war-ravaged Iraq and Lebanon and other countries scarred by violence, including Israel, Egypt, Libya, and Yemen, witnessing the changes that swept the Muslim world and laboring to tell its stories.

Every Man in This Village Is a Liar is Megan K. Stack’s riveting account of what she saw in the combat zones and beyond. She relates her initial wild excitement and her slow disillusionment as the cost of violence outweighs the elusive promise of freedom and democracy. She reports from under bombardment in Lebanon; records the raw pain of suicide bombings in Israel and Iraq; and, one by one, marks the deaths and disappearances of those she interviews.

Beautiful, savage, and unsettling, Every Man in This Village Is a Liar is a memoir about the wars of the 21st century that listeners will long remember.

“A bell-clear, powerful indictment of the debacle of recent Middle Eastern war policy…. A scathing look at the human costs of war.” ( Kirkus Reviews)
"Stack takes readers deep into the carnage where she was exposed to the insanity, innocence, and inhumanity of wars with no beginning, middle, or end. Her soaring imagery sears itself into the brain, in acute and accurate tales that should never be forgotten by the wider world, and yet always are….. Anyone wishing to understand the Middle East need only look into the faces of war that Stack renders with exceptional humanity." ( Booklist)
“[A] searing memoir….gripping accounts of the sorrows of war. [Stack’s] vivid, atmospheric prose and keen empathy make her a superb observer of the region’s horrific particulars.” ( Publisher’s Weekly)

Every American should read this book.

This book gives a good impression of the realities of war and the effects of policy in the Middle East.

Some of the writing was silly

'Stars' subtracted off for silly writing style. The last 1/4 of the book is very good, though, and redeems itself. Much has already been said about the contents so I will not repeat. My problem (only 3 stars) is the irregular quality of the writing. When Megan Stack writes as a reporter I appreciated the story. Factual from her viewpoint, straight forward, gripping. But then, too often she writes as if she is a novelist (albeit not a very good one, in my opinion.) Too many (silly) similes and ridiculous metaphors. These writing techniques were overused and often left me scratching my head as to their significance or purpose. In one passage where she told us that (in Egypt) big tanks, during a civil disturbance, were appearing in the streets during foggy weather, she writes "tanks loomed through the fog like dinosaurs....." Huh!
Dinosaurs???? Don't we all know what tanks look like? What Foggy weather looks like? 'Nuf said. Now we have to imagine dinosaurs........something no living being has actually ever seen?
The language is just too funny and incomprehensible.
The story is good, though. Worth reading just for the POV that the middle eastern people have towards America. Read this to get into their minds.....to see how THEY perceive us and why. Quite an eye opener.
You will not think of this "war on terror" the same way you did.