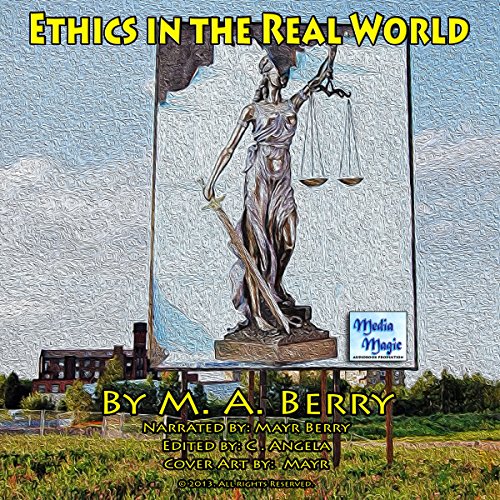 Ethics in the Real World

Ethics in the Real World

By: M. A. Berry
Narrated by: Mayr Berry

In this audio book you will learn why it is important to develop a strong ethical culture in our personal lives and well as in places of organizational management. In addition, I reveal how issues of self-esteem and self-efficacy can play a role in shaping an individual's perceptions of right and wrong behavior. I also examine how narcissistic personality and character disorders can influence ethical behavior. Using examples from my own experiences as an entrepreneur in the entertainment industry and a corporate insider as an alumnus of Capitol EMI Records, I help illustrate how ethics can help steer individuals and their companies to achieve successful outcomes or experience epic failure.

A Deeper Prespective For Ethics In The World

Yes, I would! For it's reach with deep and valuable knowledge about a topic seemed familiar. Then I found various unconventional perspectives and angels. There's always new. That's what I found with Ethics and Mayr Berry's titles generally. She discussed many ideas and issues as the early ethical influences, their rule in shaping the person's character, the confusing experiences of having an original culture that is different from the one of the place you live in, and being tough values by people don't adopt them in real life, and the rule of the two factors in motivating the person to establish his or her own ethical values.I was reminded that it's also important to improve our abilities to defend ourselves against the others' unethical behavior. There's also the character disorders, and how they cause unclear idea about what's right and wrong. How they can lead to damages, sometimes are severe, in the person's business and personal life. And how big corporations can be affected by the ethical standards and behavior of their leaders..

Which character – as performed by Mayr Berry – was your favorite?

Well, it's not a novel, but there were several examples the narrator told to clarify her points. My favorite was the brave woman that, for the first time, stood up wisely against an unethical behavior at her work.

Yes, it was! For Mayr's narration grabbed my attention, the theme of the audiobook was interesting, and for the examples she brought from her experiences in her business life, and from ethical situations big companies witnessed.

1 hour of rubbish about this woman's business and some hypnotising positive thinking stuff at the end. Hated it. Want refund.