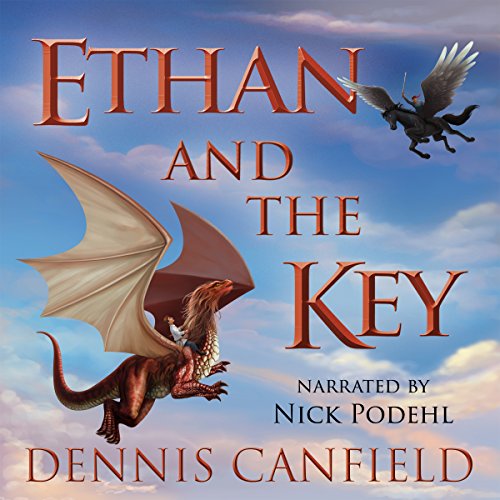 Ethan and the Key

Ethan and the Key

Twelve-year-old Ethan Mason is focused on baseball, math tests, and staying out of Howard Russman's way. That is until a mysterious puddle of green light appears in the upstairs hallway of his home. The light brings Ethan to the kingdom of Abentur, a beautiful world defended by a dragon against vicious invaders and Draykik, their brutal leader.

Ethan can't tell his parents or friends or anyone else about the new world he's discovered because he has no way to prove, even to himself, that it really exists.

When invaders capture the castle and take him and the royal family prisoner, Ethan learns that he alone may be able to save Abentur. But should he risk his life for the kingdom?

"This adventure rides as smooth and as thrilling as the flight through the clouds on a mystical dragon." (Tonja Decker, Bookworm for Kids)

"Nick Podehl's dynamic narration is well suited to the nonstop action of Canfield's middle-grade fantasy... This will be lots of fun for family listening." (Audiofile Magazine)

Ethan is a twelve-year-old boy who enjoys hanging out with his friends and doing what middle-school aged boys like to do. Then, one day, when his parents are out, Ethan sees a pool of green light appear in his house. He steps into it and is magically transported to another time a place, to the kingdom of Abentur. There, he meets the royal family and discovers that the kingdom is under assault from a group of invaders. He also learns that a dragon named Smoke is the best defense the kingdom possesses. Slowly, Ethan learns secrets about the Abentur, the royal family, and his own family as he travels back and forth between the two worlds.

I think this is a wonderful book for almost everyone, child and adult alike. There is some violence and angst, but overall, it’s a well-written, well-narrated tale of good winning over evil. There’s a lot of action to keep the listener engaged. We also get to see how Ethan values friendship ,and how he trusts his instincts when dealing with whatever comes his way. He’s a smart and brave young man who wants to do the right things. I could easily see this book become a series; in fact, I hope it does. It’s an engaging, humorous, and fun listen.

I received a copy of this audio book as a gift from the author. His generosity is appreciated, but had no influence on my review of this book. All opinions expressed in this review are my honest opinions of the audio book.

This was a great “middle grades” book that is fun for adults and children. It isn’t too long (about 5.5 hours on audio) and continues to be interesting throughout the book. Unlike some kids’ books, the ending is not as predictable as you would think!

Since part of the description of this book mentions that it is for ages 9 to 11, I put it to the ultimate test and had my nine-year-old son, Olsen, listen to it. He absolutely loved and gobbled it up! He kept on telling me how it was the best book and he did not want to stop listening to it. His review will follow this one.

Audiobook narrator Nick Podehl rating: 5 stars
As usual, Nick Podehl was terrific in reading this book. I am kind of surprised at the ability of Dennis Canfield to find such huge narrators for his books! (I have only read this one and Back to Christmas, which is narrated by Simon Vance).

I liked it. It was a fun and good book. It was cool how he just stepped through the light and he went to that new world. I liked the dragon. I like how the dragon and the horse raced. There was nothing I did not like about the book. I recommend this book to people who like action. I would like to know if there will be a sequel since it was such a good book.

My son and I enjoyed listening to this immensely. Although he was slightly above what I would guess was the target audience age, he found it very enjoyable. If you have an elementary or middle school listener, especially one who likes books like the Rick Riordan series or Sisters Grimm, I would highly recommend this one.

I also found it enjoyable as an adult. Part of that is having such an excellent narrator. We had enjoyed him on other books and that helped hook us right away.

This could be a good book either for the car or before bed. Engaging and exciting, but nothing that would give you nightmares!

Amazing story. I listened to it with my 6 yo grandson who loves audio books. We listened in the car, and he was so hooked on the story that he was shouting, "turn it on," before he even had his seat belt fastened. The characters are interesting, the adventure fun, and the narrator is fantastic. This is well worth the listen. I received a free review copy, which in no way influenced my opinion. In fact, my grandson, who has become well-acquainted with reviews, is the one who pushed all the five- star buttons before I even had a chance.

Key to a Great MG book! A Must Read

Ethan is a grounded (level headed), young boy who enjoys his life, friends, and sports. He even likes and gets along with his parents. (No orphans here!) His only qualm is Howard, a bully who any reader/listener will want to punch in the face.

He wasn’t bored, wasn’t looking for adventure, and didn’t (cliche) feel like he was different. When he slips into the light of the gateway, he is bewildered. His actions and dialogues are believable and realistic.

The characters are so fully developed, it’s easy to fall into this world and slip away from real life and time. I loved how Ethan balanced both worlds. I loved how explanations were shown and not told (literally).

Nick Podehl has narrated numerous books, but this was one of the few books he’s read that I’ve wanted to listen. As most will agree, he’s a fabulous voice talent. He added emotion, pacing, and excitement to Ethan’s adventure and heroism.

Ethan and the Key is a hero you’ll want to follow into the Abentur realm and back (or anywhere else the Gateway will send him!)

It’s a true stand alone book, but one can hope we see more Ethan & Company!

Well, I'm living proof that it's not just for youngsters, I'm 50 and have no kids and I loved this story! Haha! This is a great tale of a brave young boy, dragons, and everything that happens in between. It's a fantastic tale of a boy who is transported to another world with royals and dragons. Really great book, great narration, I'd definitely recommend this to all my family & friends, loved it! :)
I was given this free review copy audiobook at my request and have voluntarily left this review.

Every Boy Wants to Be a Hero

As with many fantasy novels the young main character feels inadequate and persecuted in his everyday school life. Then, something strange happens, a strange glowing light takes him to another world. In the other world circumstances force him, or make him bold enough to do things that he wouldn't normally consider doing in his home world. This new boldness allows him to perceive his actions and reactions in both worlds in a new light.

The book shares some similarities with the movie version of 'The Never-Ending Story'. There is some non-leathal fantasy violence but otherwise the book is 'clean' and an easy listen for kids and adults too. This makes the flying horses and the dragon all the more enticing.

I listened to Ethan and the Key, narrated by Nick Podehl on audible.

This is a fantasy story about a young boy that gets transported to a kingdom with strange people, dragons and castles. Its starts off right away and needs little build up to get the reader hooked early. It will be a great read for that pre-teen kid. Story is straight forward, but there are a few age appropriate struggles, if you include..... well I won't say because that could impact the your enjoyment. Our MC overcomes some personal doubt and mediocrity and rises to the occasion and help save those that are in need. It is well worth a read.

Podhel did a really good job narrating. His regular reading voice is clear and pleasant and his character voices were very good. He did such a good job I would want to hear him read more books.

I received this edition in exchange for an unbiased review.

This was a fun take on the “chosen one” fantasy. Ethan is living his normal life some may even say a boring life, when suddenly there is a strange green glow in the hallway and when he goes to check it out he ends up in another world that is anything but normal!

Once he goes through the green glow Ethan has quite a journey ahead of him there are some twists and turns and revelations that change everything. As Ethan straddles these two worlds and tries to figure out which one he belongs in he sees his life quite differently than where we started! Can Ethan help save Abentur? Or should he just go back to being a normal boy? Is everything as it seems or is there more going on here than meets the eye?

This great fantasy adventure that starts right away and doesn’t let up till the end. I don’t want to give too much away, I will say this is a well written book with well-rounded characters and I would definitely recommend this one for a family road trip!

Nick Podehl’s narration of this one was great he gave everyone a distinct voice and accent and you always knew who was talking. He captured Ethan’s awe and innocence very well along the journey.

This is my second book from this author and I really enjoy his writing style. If you haven’t read his book Back to Christmas I highly recommend that one too!

**I received this book from the author for a fair and honest review.**