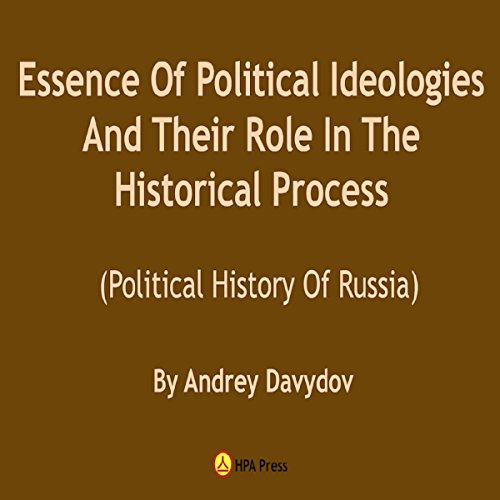 Essence of Political Ideologies and Their Role in the Historical Process

By: Andrey Davydov
Narrated by: Ronald Joy
Try for $0.00

If we rely on logic of history of political and legal teachings, then this implies that this history began in Rus' at the time when pagans were huddled into a river. This fact in itself is of little interest. What is of interest is the following: what is the essence of this fact?

In his time, T. Mann expressed a thought that if humanity once again were put in pre-civilized conditions, the first thing it would do is create mythology. Mythology, as it is known, operates on images. In terms of survivability, there is nothing comparable to the degree of survival that an image has. This can be traced back through heraldry of many countries, including Russia. At the same time, as strange as this might seem at first glance, military authorities of all countries in the world today can be nominated for the palm of victory in the use of mythological images.

An image has a very large informational capacity and, at the same time, it is multifunctional, very convenient, and aimed directly at psyche of a person, who under the influence of imagery (mythology) carries out his physical actions only within the limits of the received image. Naturally, an image can be intended not only for an individual or a group, but also for social, ethnic influence. In the history of political and legal doctrines of Rus' it is interesting to trace the work of the system of images from the point of view of justification for existence of monarchy, relations between monarchy and Christianity, monarchy and philosophy, ideology and politics, real and virtual worlds.

Politics, according to statements made by political scientists, as well as directly or indirectly related people, claim relation to art. If this is so, maybe it is worthwhile to consider politics alongside creative works of people of literature, poetry, painting?

We came back to that what was refused from the beginning. Thank God that myth turned out to have truly amazing survivability.