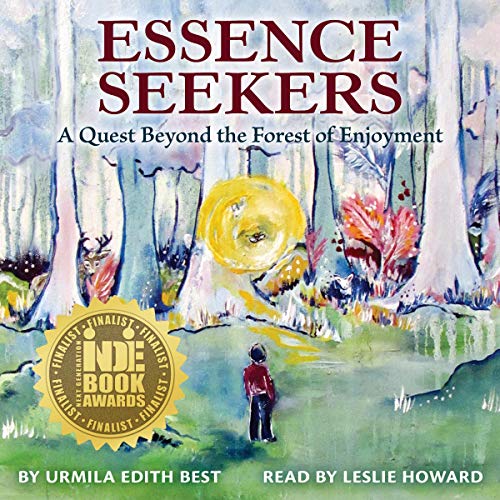 “Stillness and silence had heralded the divine being. Now sounds again filled the forest as birds called, branches moved, and water ran over rocks. The being had simply vanished. Somehow the forest felt more alive than before, more full of mystery, yet it was also unchanged. Was that real?”

Essence Seekers: A Quest Beyond the Forest of Enjoyment is an allegorical spiritual journey that takes us through practical, emotional, and psychological steps from a beginning curiosity and longing to enlightenment. It inspires with hope, while it aids with deep introspection and authenticity. Rooted in Eastern wisdom adapted from ancient texts, the universal and non-sectarian themes speak to any and all seekers of the essence of life.

Avid starts out as part of a nomadic group, journeying with his family who seek wealth in the forest which they sell in villages and cities along their route. Their happiness and hopes for satisfaction are frustrated by perils representing various internal and external obstacles. Avid gets help from a mysterious guide in the forest and eventually joins with two friends on a quest for the essence, or nectar, of life. But what is that exactly? Will they overcome the diversions and tests to find it, and at what price?

Essence Seekers is based on allegorical texts originally written in Sanskrit and Bengali, bringing those ancient metaphors to life and giving timeless wisdom and guidance to anyone looking for extraordinary fulfillment.

"Anyone who is a genuine seeker of life’s highest truths will find Best’s account of an avid soul’s journey towards deep meaning and authenticity to be personally relatable and eternally profound." (Mpho MacChambers, social activist and changemaker, founder and executive director of Kula Education)

What listeners say about Essence Seekers

The story wasn't bad. It just wasn't for me. I found myself unable to be held by it.

Very thought-provoking work about Avid, a member of a nomadic group on a journey through a forest seeking wealth. It's about discovering and following your true path, discovering all sorts of challenges and lessons along the way. It's beautifully written and narrated, thought it was very enlightening. While I'm a "Christian Conservative," I gave this a completely unbiased chance and found it very uplifting and interesting. :) Nicely done. I was given this free review copy audiobook at my request and have voluntarily left this review.