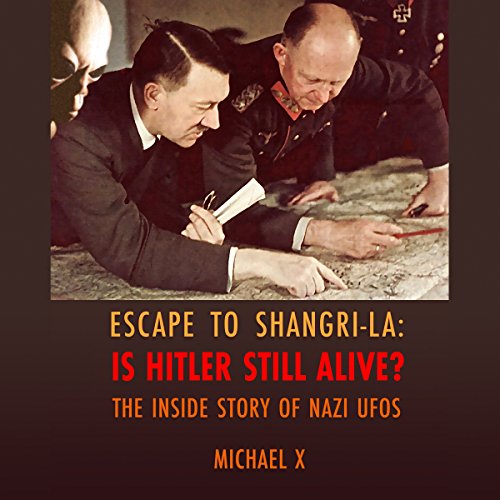 By: Michael X
Narrated by: Nicholas Barker
Try for $0.00

In Escape to Shangri-La, Michael X - the very first American researcher to write about Nazi UFOs - provides an overview of the situation.

Using early 1950s articles from Police Gazette, Michael X was able to piece together the story - the escape of U-boats U-530 and U-977 from Nazi Germany. Hitler went to Argentina, where UFOs were being developed in secret underground installations by West German scientists. Meanwhile, American Nazi saucers were being developed in places like West Virginia and Area 51.

The Nazi saucers were modeled on the silent "electromagnetic" or "bell" saucers built of copper by Viktor Schauberger, an Austrian inventor, in 1940. (Michael X's The German Saucer Story describes the Schriever-Habermohl and Bellonzo-Schriever-Miethe discs, concluding that German scientists were busy assembling large flying discs in underground factories around the world.)

This is an exact facsimile of the original 1960 Saucerian edition, with all of the flavor of samizdat reports of the era, including artsy paste-up and a whimsical feel, despite the subject matter.

This wonderful piece of vintage Americana makes a great addition to the shelf of today's serious ufologist. But more than that, it is a piece of history. Escape to Shangri-La provides details that may have been lost along the way - as the material in this book was spread and co-opted by so many other researchers.

Here, however, is where it all began. Not long after Michael X made these revelations, he disappeared forever. Was he taken away by the saucers, or by the MIB? With time, and with increased consciousness about this corner of history, perhaps we will someday find out.

What listeners say about Escape to Shangri-La: Is Hitler Still Alive?

Pretty far out there. If you’re into conspiracy theories you might enjoy it. Your choice.

i started this book looking for info about nazi UFO research and was prity cunvinsed that hitler was died, just like the histery teacher in school said. after a few minnits i was thinking he mite have lived longer. then the author said that hitler was born in 1889, if was still allive today he would be 76 years old. that didnt seam right to me so i looked but his berth date and he was born in1889, but when i did the math that means he would 126 years old today. so i checked the publishing date of the book, thinking it mite have been written 40 or 50 yeas ago, but it was published in 2015. so if the author is going to LIE about something so basic and critical to the theme of the book can i trust anything in that book?!?!?!?!?!