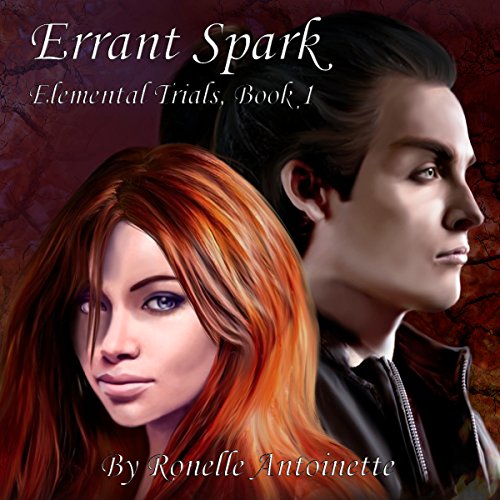 By: Ronelle Antoinette
Narrated by: Ginny Ross
Try for $0.00

In Egalion's Imperial court, there is splendor and luxury, but it's also a realm of treachery. Cloak-and-dagger political maneuvering threatens to destroy the peace of 2,000 years.

Battlemage Jex Xander has a mouth that gets him into trouble; while in contrast, Enari Namelum speaks not at all. Amidst the mounting chaos, passion and romance should be the last thing on their minds, but life and the Goddess seem to have other ideas.

They say to keep your friends close and your enemies closer, but at court you can't tell one from the other, and they change at the flip of a coin.

What listeners say about Errant Spark

What other book might you compare Errant Spark to and why?

If you are a fan of Game of Thrones, you are sure to love Errant Spark by Ronelle Antionette. At the heart of the story there are several ruling families and each seems to have his or her own agenda at play. Like GOT there is a power struggle going on with loads of conniving people each making a play for power in some way. You cannot trust anyone because as the story progresses you discover that everyone has secrets. EVERYONE.

On the down side this story started off very slow. Considering all the ground work that the author had to establish it makes sense. Trust me. You need to stick with it. Once it takes off the pages simply fly by. The characters are complex and well defined. While there are several intricate stories intertwining, Jex and Enari's story steals the show. Despite Enari's non verbalization, her emotions speak volumes. With all the backstabbing and closed door scheming, her relationship with Jex is quite refreshing. Add it that the amazing narration and it simply comes to life.

Ginny Ross did a fantastic job narrating Ronelle Antionette's Errant Spark. Since the story centers around several different affluent families from different countries there are multiple dialects for Ginny to use. She did a brilliant job of differencing between the dialects. I would think one the hardest characters to portray would be Enari since her words are inside her head and not really vocalized but Ginny really connected me to this character.

I am looking forward to continuing the series and really hope to explore other selections by both the author and narrator.

This was a good start to the Elemental Trials series. Enari has been summoned to help with a royal birth and Jex is tasked with ensuring her and her healers’ safely to the palace. Jex, the MMC, is a battle mage, a womanizer, is arrogant, self-absorbed, and irresponsible, but his character does develop throughout the book. Enari, the FMC, is mute, an apprentice healer, observant, and guarded. I had many issues with her being mute, mainly because of the situations that she ended up in and her illogical reasoning for it, but other than that, I liked her character. This book was very slow to start and as much as I like to know the characters, world, and politics of the book I’m reading, it was just too slow for me to really grasp it with an audio version. I did like that the main focus wasn’t romance, but politics of their world.
Ginny did a really great job with this narration! She used different voices, portrayed every emotion, and had a lyrical voice that brought their world to life.
*I was given this free review copy audiobook at my request and have voluntarily left this review.

I found the story slow to get started because there was so much information to share, it did improve and was ok but it didn't hit the right spot for me and I think that a large amount of that was that the narrator and the story didn't seem wonderfully suited to each other. I did like the way that Ginny Ross voiced the characters and represented the non verbal aspects of characterisation. I did like Ginny Ross' narration technique, I just didn't think it was right for this book.

In conclusion, I feel that this book would have been more pleasurable for me if the narrator and the story were better suited to each other, as both had some real strengths but together they weren't a good mesh. I feel that the story does have potential and people who love  family and political fantasy dramas could enjoy this. I have seen it likened to Game of Thrones and I didn't enjoy that (I didn't finish G.O.T book 1) so maybe if that's your thing then this book and any subsequent follow ups may really suit you.

There is intrigue in court life, Goddess worship and lots of action in this book. Enari thinks she is just a simple novice but during this adventure she finds out she has much more to herself than she ever imagined.
I found the reading quite stilted but still enjoyed the story.
I received this audiobook at no-cost from Audiobookworm Promotions. The gifting of this audiobook did not affect my opinion of it.

It's A Story That Picked Up Speed As It Went Along

I would recommend to someone who is looking for something different. Being the first book in a series, they will find that it starts off slow but if they're a patient person they won't be disappointed by the end.

It's a toss up between Jex and Anari. Jex is a man who takes a shine to a woman of very few words but that doesn't stop him from communicating with her. Anari may not have much to say but the narrator gets her feelings across to the reader. She's a woman with secrets she didn't even know about and it's interesting to see her come into her own.

I like the fact that she doesn't go out of her way to change her voice too much when speaking a male part. But she changes her tone just enough that you know when, for example, Jex is talking. Having an accent also added to the experience because it gives a voice to a character that if reading the story you're not quite sure if they speak with an accent or not.

I could not listen to it all in one sitting because of outside forces having their say. Plus there was so much going on at the beginning that I had to stop in order to digest what was being said. Being over 10 hours I don't know that it would be possible to do in one sitting anyway.

This may have started out slowly for me at the beginning but by the end I'm looking forward to listening to the next book in the series. I did decide that, at least for this book, I would want to have a copy of the book so that I can read at the same time Ms. Ross is reading to me. It might clear up some things at the beginning that seemed confusing. But it will be interesting to see what direction the next book will go. Maybe a new adventure.

I voluntarily reviewed an audio version of this book.

Would you try another book from Ronelle Antoinette and/or Ginny Ross?

Not from the narrator for sure. Her voice didn't have emotion at all.

What was most disappointing about Ronelle Antoinette’s story?

I don't blame Ronelle's book. I just couldnt connect with the narration.

Her voice soundes robotic. yes it has the accent, but it didnt have emotion.

Narration had a bit of a lyrical/ethereal quality

On Narration of Errant Spark (The Elemental Trials, #1) . . .
Ginny Ross had a lyrical almost ethereal quality to her voice over for this romantic fantasy. I could imagine myself in the setting and taking in all the things around me. The court, the woods, the lightening across the sky, the fleeing for safety, the danger, the intrigue, the element of should I or shouldn’t I. The various points rang true and clear in Ross’s voice with the varied inflections and distinguish gender. I did not read the book first, I opted to listen and I would say she brought an element of being able to visualize the various section more clearly.

The Story . .
One talks, too much, too openly without filter. The other says nothing and tends to be very observant. I have gotten myself accustom to the female being the one with the mouth that goes on for days and not filter in place. It was enjoyable to find a man that has the same issue, Jex. Enari was a bit too quiet but she knew when words were needed. She learned early that speaking could lead to avenues untraveled. And that was not always a good thing. She was intelligent and resourceful.

I am wondering in what direction the next installment will take with this series. If learning nothing more keeping your enemies close does not always open the doors you need. I had a fantasy filled ride in to a realm filled with treachery. The blurb just gives you a hint of what lies within. Take a read or a listen and find the realm behind The Elemental Trails.