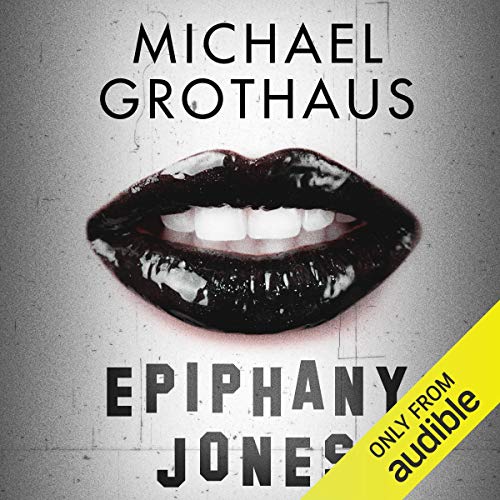 By: Michael Grothaus
Narrated by: James Lindgren
Try for $0.00

Jerry has a traumatic past that leaves him subject to psychotic hallucinations and depressive episodes. When he stands accused of stealing a priceless Van Gogh painting, he goes underground, where he develops an unwilling relationship with a woman who believes that the voices she hears are from God.

Involuntarily entangled in the illicit world of sex trafficking amongst the Hollywood elite and on a mission to find redemption for a haunting series of events from the past, Jerry is thrust into a genuinely shocking and outrageously funny quest to uncover the truth and atone for historical sins.

A complex, pause-resisting psychological thriller, riddled with twists and turns, Epiphany Jones is also a superb dark comedy with a powerful emotional core. You'll laugh when you know you shouldn't, be moved when you least expect it and, most importantly, never look at Hollywood, celebrity or sex in the same way again. This is an extraordinary debut from a fresh, exceptional new talent.

Michael Grothaus is a journalist who spent years researching sex trafficking, using his experiences as a springboard for his debut novel, Epiphany Jones. As a writer at Fast Company, Michael tells the stories about tech, creativity, personal health, the effects of mass media on our psyches and just plain mysterious stuff. For VICE he tells stories about cultures, subcultures, sex and pornography and has also done immersion journalism at geopolitical events including the Hong Kong protests against Beijing in 2014.

As a contributing writer to The Guardian and Know Your Mobile, a features writer for Engadget and the former European editor for AOL's popular tech news site TUAW, Michael regularly writes about all things mobile. He also contributes to the online men's lifestyle magazine Asylum and is a former screenwriter and the author of a dozen tech books published by Pearson and Apress. American born, Michael now lives in London.

What listeners say about Epiphany Jones

Without a doubt hands down the best book I've read all year.
I found this book on accident but after reading the description decided it might be good. I was so not disappointed.
I've never reviewed anything so it's hard to convey how much I liked this book and for a first time author the impression his writing style left on me. Mr Grothaus is someone I truly hope keeps writing he's obviously talented maybe even to a fault.
James Lindgren is fast becoming a favorite narrator for me and I feel his voice was absolutely perfect for this book.