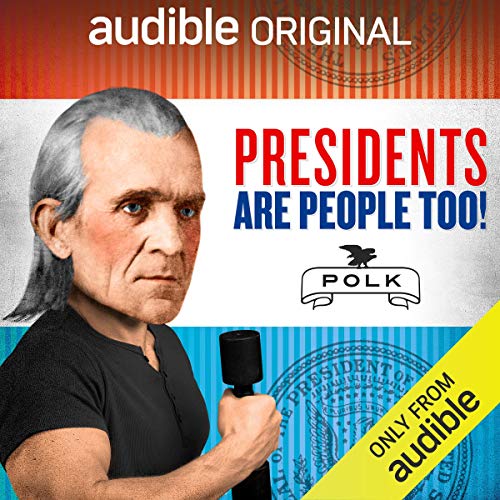 What listeners say about Ep. 1: James K. Polk (Presidents Are People Too)

I listened to this (and episode 2 for about 60 seconds). Clearly the authors have no respect whatsoever for the context of historical cultural norms. The purpose seems to be to humiliate, chastise and smear the reputations of anyone who served their country in the thankless job of being President. And to demonstrate their hatred of this country. The second intro starts out speaking to fellow Americans and "to any other Nationalities who may have ended up here by accident" Shame on you.

Great piece of historical education with great hosts and wonderful guests: a very intelligent kid, a fashion icon, a professor, and 2 men from The Daily Show. I look forward to more of these quick lessons on the President’s and their families, and I really appreciate the examination of how they affected our history with both the nice and the vice.

Not sure who the target audience is, Kids or Adults?

Mildly entertaining. Interesting facts about the subject. Could have done without the vulgar language in the contribution by John Stewart.

Not what you may think!

I was extremely disappointed to find out that this book is a comical treatment of our presidency! I feel as though I have wasted my money in selecting it. I hope that readers who might make the same mistake will look more carefully as to its content

A clear display of neophytes and their facile perspective lacking any sense of temporal or period context.