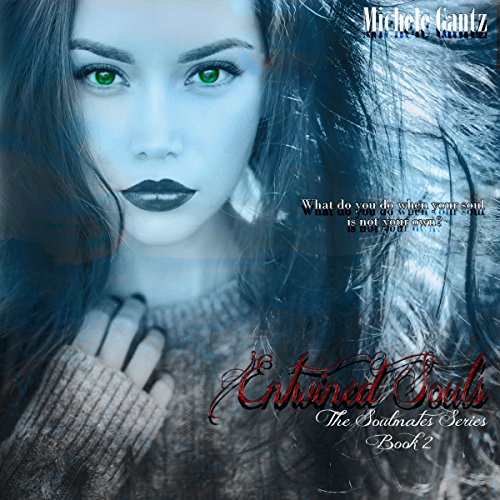 By: Michele Gantz
Narrated by: Terri England
Try for $0.00

Amia Grace has always escaped into the abandoned graveyard to write, no clue why she's drawn here of all places. Lately, it's the only place that the feeling of being watched doesn't overwhelm her. Everything in her life on track, until she meets Gage McGavin.

There's something about him that creates a riot of emotions that Amia can't quite place her finger on. One moment she wants him, the next she wants to run scared.

Gage only wants Amia for one reason. Her power.

She's the future, and he plans on controlling that.

Until his brother enters the picture. Hunter has a goal of his own.

Amia will be his.

What do you do when your soul isn't completely your own?

What listeners say about Entwined Souls

EXCELLENT PREMISE, THOUGH THE PACE WAS STOP AND GO

I wasn't sure I'd be able to listen to all of it by the gravely voice that started the audio. Fortunately, that was only a small bit of narration.

The writing had it's ups and downs. I had to change my mental image of Amia couple times. She began as the "I'm not hot, I'm a nerdy girl" but that didn't carry through. As soon as her relationship(s) began, there was no more self-doubt... or nerdiness, or even wearing glasses, and her writing deadline didn't seem to matter any more.

Then the storyline got good. New twist with Vampire Soul-mates. Two brothers competing for the same girl. One evil, one good. Both good kissers. I was disappointed at Gage's quick reveal of his true nature... I would have liked him to be a bit more tempting and Amia being more confused over the two. But, alas, it's a short book.

The ending came fast. Amia has a revealing of power and an understanding of position that goes by lightning fast. Like, "I'm not totally sure I understand what it all means," -fast. But the characters seem to understand their positions, and hers. There's a soft HEA with the epilogue dedicated to the villain and a glimmer into his future, and it looks dark.

Back to the narration. Terri England did an appropriate job. Comme ci, comme ca. She has a country lilt, admittedly appropriate for the demographics, but somehow it was too lazy(?) and gravely for male vampires (IMO). Good female—Bad male vocals.

ONE THUMB UP with a Big Smile!

Entwined Souls, the first book in The Soulmates Series, is a fantastic paranormal romance. The premise is unique with great world-building, going in-depth within the paranormal realm. Both the plot and the characters are well-developed and engaging. There were some issues with the pace; however, overall, it's an enjoyable story. Terri England does a wonderful job with the narration, bringing the characters to life.I received a free copy of this audiobook at my request and have voluntarily left this review.

A well written paranormal romance. The author takes the classic vampire tale and gives it a twist. A great captivating read .

this was unlike anyrhing else I've read on the paranormal level. story all on its own. I can't wait for more!!! I highly HIGHLY recommend!

Great start to a series. An entertaining, engaging, interesting and enjoyable story.

The story pulled me in right away and keep me listening until the end. While I was pulled in immediately the minute Hunter entered the picture the story really took off. It's a shorter book and moves forward at a pretty fast pace. There are several little twists on the normal vampire stories. I don't want to say more and give anything away. I'm looking forward to the next book in the series.

Suspense, mystery, steamy romance, unexpected twists and a bit of humor all woven into a really good story. Great cast of characters.

Amia Grace is special. She has power and a destiny to fulfill. Brothers Gage and Hunter McGavin, one good, one evil both want Amia but for entirely different reasons. Vampire soulmates…interesting.

Terri England did a really good job with the narration. Easy to listen to for long periods of time. Nice even pace. Great character voices and accents. Even her male character voices were good. You could tell which character was speaking. She made the characters and the story come to life. Very enjoyable.

wow what can I say

The narrator made this book a hit in my eyes, it was like we were sitting there just talking face to face about events in her life

Different kind of paranormal. Love it!!!

This story had me from chapter one. It has mystery twists at every turn and a good plot. The characters were well developed in my opinion. This is a different kind of vampire story it has long awaited love, power hungry vellins, souls intertwine, and a sassy heroine. Must listen. Wroth a credit. The narrator was good. I was provided this audiobook at no charge by the narrator in exchange for an unbiased review via Audiobook Boom

The Soulmates Series Book One

The story was unique and different than the typical vampire romance stories. It did take awhile for the story to grab my attention but it might have something to do with the audiobook quality.

The narration was not as good as I'd hoped. It sounded muffled and raspy from the beginning and took away from the story. Not sure if perhaps the recording equipment caused it or added to the unpleasant sound at times.

Gage really got on my nerves! He seemed so sweet at first... Hunter is the total opposite of his brother. I really liked him.

Amia is special and there is a lot about her past and future that is unexpected. There are some twists & turns and I'm still puzzled about a few things but perhaps some of it will make more sense when I read the next book in this series.

I'm looking forward to the next book but I hope they can work with better audio equipment.

There is some language and descriptive bedroom scenes.

I am not a big fan of this book. The story was ok. Not much of one. the sex scenes were to graffic. I am not a prude but they were a little much and it seemed that is all they did. If it had more of a story line then maybe it would have been bareable. It also seemed everyone accepted that vampires existed to easily. I am almost tempted to try book two to see if the story gets better. I was voluntarily provided this free review copy audiobook by the author, narrator, or publisher.