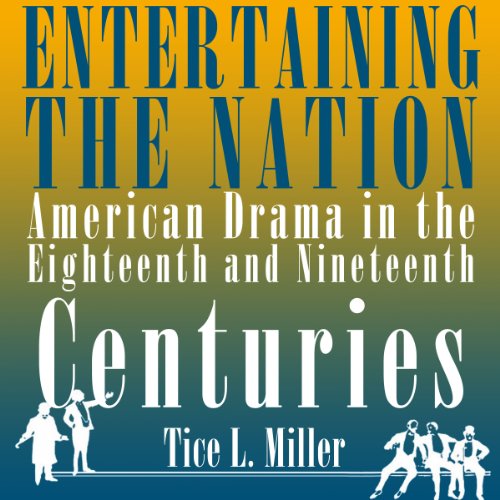 In this survey of eighteenth and nineteenth century American drama, Tice L. Miller examines American plays written before a canon was established in American dramatic literature and provides analyses central to the culture that produced them. Entertaining the Nation: American Drama in the Eighteenth and Nineteenth Centuries evaluates plays in the early years of the republic, reveals shifts in taste from the classical to the contemporary in the 1840s and 1850s, and considers the increasing influence of realism at the end of the nineteenth century.

Miller explores the relationship between American drama and societal issues during this period. While never completely shedding its English roots, says Miller, the American drama addressed issues important on this side of the Atlantic such as egalitarianism, republicanism, immigration, slavery, the West, Wall Street, and the Civil War.

In considering the theme of egalitarianism, the volume notes Alexis de Tocqueville's observation in 1831 that equality was more important to Americans than liberty. Also addressed is the Yankee character, which became a staple in American comedy for much of the nineteenth century.

Miller analyzes several English plays and notes how David Garrick's reforms in London were carried over to the colonies. Garrick faced an increasingly middle-class public, offers Miller, and had to make adjustments to plays and to his repertory to draw an audience.

The volume also looks at the shift in drama that paralleled the one in political power from the aristocrats who founded the nation to Jacksonian democrats. Miller traces how the proliferation of newspapers developed a demand for plays that reflected contemporary society and details how playwrights scrambled to put those symbols of the outside world on stage to appeal to the public. Steamships and trains, slavery and adaptations of Uncle Tom's Cabin, and French influences are presented as popular subjects during that time.

Entertaining the Nation effectively outlines the civilizing force of drama in the establishment and development of the nation, ameliorating differences among the various theatergoing classes, and provides a microcosm of the changes on and off the stage in America during these two centuries.

What listeners say about Entertaining the Nation