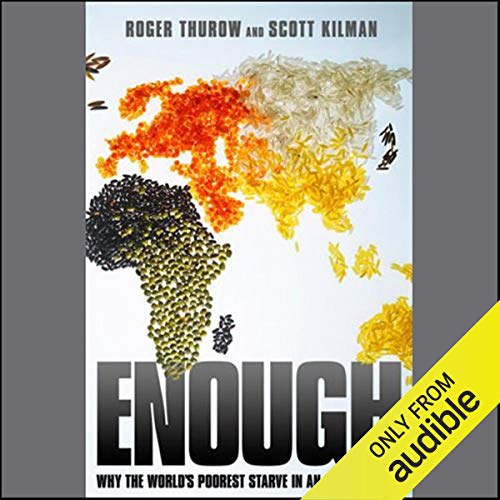 By: Roger Thurow,Scott Kilman
Narrated by: Tavia Gilbert
Try for $0.00

For more than 30 years, humankind has known how to grow enough food to end chronic hunger worldwide. Yet while the Green Revolution succeeded in South America and Asia, it never got to Africa. More than nine million people die of hunger, malnutrition, and related diseases every year - most of them in Africa and most of them children. More die of hunger in Africa than from AIDS and malaria combined. Now, an impending global food crisis threatens to make things worse.

In the West we think of famine as a natural disaster, brought about by drought; or as the legacy of brutal dictators. But in this powerful investigative narrative, Thurow & Kilman show exactly how, in the past few decades, American, British, and European policies conspired to keep Africa hungry and unable to feed itself. As a new generation of activists work to keep famine from spreading, Enough is essential reading on a humanitarian issue of utmost urgency.

"For sensitive souls, the book's vivid descriptions of the ugliness of African poverty can make for difficult reading. But the knowledge is worth the unpleasantness. Thurow and Kilman lead the reader on a journey across continents, explaining the complexities of economic dysfunction and reminding us that there is a symbiosis of wealth and poverty that explains why starvation endures in an age of plenty." (USAToday.com)
"A page turner. Unless you simply don't give a damn, this is a must read, and it is a must read now." (The Huffington Post)

What listeners say about Enough

This is a good account of the events and decisions which have contributed to Africa's hunger issues. Excellent for people new to the various issues affecting hunger and poverty in Africa, and a good summary and refresher course for those who ma know something about it. But it will only be useful if readers/listeners take head of the warnings and recommendations. Well balanced and objective for the most part. Hard to be totally objective when the facts speak so clearly for themselves and reveal the injustices which the developed world has inflicted on Africa.

This is a story which must be told.

What did you love best about Enough?

The in depth research and examination of various viewpoints.

What other book might you compare Enough to and why?

I will have to read more

For all audiences but particularly for students of economics and politics

It's Time For Us To Be More Compassionate

Africa, historically hasn't gotten enough attention from the rest of the world (unless it's to be taken advantage of) and it's understandable seeing their corruption at just about every level of leadership. Hopefully books like this one will start helping people to realize that Africa has so much to offer the rest of the world and can even one day more than carry their load.

It's a shame in this day and age of so much excess, that literally millions of people in Africa go starving everyday.

Time to stop the talking and start the action towards helping our African brothers and sisters to not only be fed for a day, but to teach them how to feed themselves for a lifetime.

This book is informative, interesting, and compelling. It revealed many of the root causes of hunger around the world. I recommend it to anyone interested in learning more about hunger and the world in general.

And frustrating too. A reminder how interconnected everything is. And how lobbying and politics really muck things up horribly for people around the world.

Audible had this book on tape when I couldn't find it in the stores!

Here's how the agriculture revolution failed so many in this world. Eat something before you start this book.