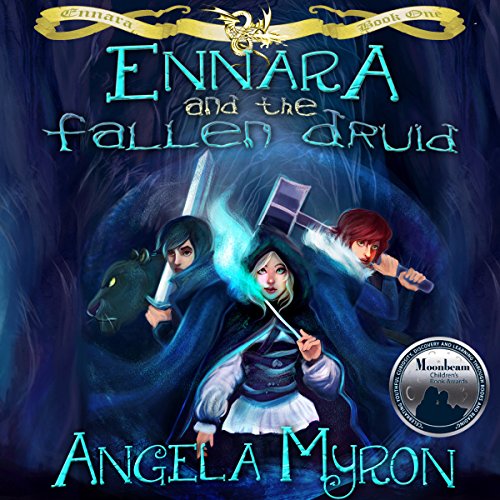 Ennara and the Fallen Druid

By: Angela Myron
Narrated by: Crystal Marcano
Try for $0.00

Ennara and the Fallen Druid is a 2013 winner of the Moonbeam Children's Book Awards.

Eleven year-old Ennara Gaern has a serious grudge against the dragon on her right hand.

Born with a mask that foretold magical powers, she was immediately inked with the fiendish, fire-breathing tattoo that forces her to study boring texts, cover her hand continuously, and worst of all, keeps her from visiting the beautiful capital city, Dordonne. But her quiet life changes when one night she is attacked by a shadowy demon.

Tork, an old friend and wizard, is enlisted to help. But when he arrives, he informs Ennara's parents that she is her world's only hope of finding the legendary Sword of Gisilfrid, which is needed to destroy the curse that is creating the demons. Ennara doesn't want to leave on the dangerous quest, but when she learns the curse threatens her world, she reluctantly agrees.

Ennara and the wizard begin a perilous journey to the Sunken City, pitting them against dangerous oceans and pirates intent on claiming Ennara's magic as their own. With only her friends at her side, including the intelligent, aquatic cat Smoos, Ennara must defeat monsters guarding the sword and servants of the Fallen Druid. When her world is covered in darkness, will she know how to dispel the curse?

What listeners say about Ennara and the Fallen Druid

Won in a LibraryThing Giveaway.
I found it a nice length for an Audiobook.
Enjoyed the story immensely, and can't wait to share with the kids! Well plotted, clear imagery, and well able to stretch the imagination. Storyline has been overdone by publisher and other reviewers, so no need to go over it all here. Just be prepared to enjoy whether 10 or 100!
I was less happy with the narrator, not because of her skills, but because I found her voice too saccharine.

I think the author Angela Myron has done a wonderful job with bringing magic to to this story. The author managed to grab me and keep me pulled in throughout the story. I enjoyed the characters, especially Ennara. I'm already looking for the second book in Audible but I'm sure it may take some time to add. I really hope the author does add the second book to Audible. I love that this story is for the young but it's also a great story for older people who are young at heart. Angela did an exceptional job at keeping it age appropriate.

Narrator Crystal Marcano did an outstanding job with her take on this story. Her performance brought this story to life. I thought she did a great job with distinguishing each character's accents and voices. This is the first time I've listened to this narrator but I'll be looking for other stories she's narrated in the future. I'll also be looking for more stories by the author on Audible as well. Overall, I give it a 4 🌟. I received this audio from the author through AudiobookBlast at no cost for an unbiased review.

This book is filled with magic and mystery that will keep you hooked until the end!! I couldn't put it down!!

Angela Myron has all the important ingredients

Ennara’s story is a wonderful story by Angela Myron and listen that is narrated by Crystal Marcano. I find that this is a great long trip listen for the whole family. At 5 hours and 13 mins. This is great for those that love paranormal stories filled with wizards, witches and we cannot forget the dragon. The wait of each action scene is “Can Ennara do it?” “Can she get them out of this?” leaves the reader asking this throughout the book.

So wait! Getting ahead of myself! Angela Myron has all the important ingredients to the plot of this story. Young characters that young readers/listeners can relate to. Starting with 11 year old Ennara and her friend Kithe. Ennara bears a tattoo of a dragon on her wrist. Which she is always told not to reveal it. Under her Aunt’s guidance of teaching Ennara the trade of being a witch. That someday she will save the world. Something that Ennara found so farfetched that she can do such a task. The time period is of the Druids. Traveling by horse, boat and by foot.

Under the guidance of a Wizard and friend named Tork. The two of them set out on a journey to retrieve the sword called “Sword of Gisilfrid” to destroy the curse that is creating demons called Shadowspawn. In this quest it is predictable as with most stories the friend always ends up following and ends up in the adventure. Kithe is no different. However, what I do like about this character as not seen with many sidekicks. Kithe even at the young age the author has him at has a clearer and much stronger head on his shoulders. So that when Ennara seems to drift towards the bad he helps her stay on a steady course. Ennara has two sides to her magic, good and bad that she is not under full control of yet. Both sides of the magic however, helps in saving them all for the most part throughout the story. However, Tork reminds her to be mindful of not using the bad magic. The travel to the city of Dordonne with Tork, Ennara and Kithe to get supplies as they leave to the Sunken City to retrieve the Sword. An apothecary where they are picking up some of the supplies they will need for the trip. A shop keeper ask Ennara to retrieve a bracelet that she tells her is of no importance. Kithe is an important part to the scene is all I will tell you.

Along the way Tork encounters trouble with a Shadespawn and goes into a deep sleep. Braving pirates and the rough seas as the try to get to the Sunken City. It is now up to Ennara and Kithe to not only save Tork but everyone. Adding to the twosome is 2 more important supporting characters. A young boy a bit older than them named Gavin and a special marine cat named Smoos.

Yes, this book is predictable. But, it is geared towards 8-12 year olds. However, anyone older will also enjoy the listen. The narrator Crystal Marcano did an amazing and believable job with each of the characters and their voices. The only voice that seemed really young was Tork. Being an older man he seemed to be their age. I did enjoy the accents since it was more of a Scottish placed story.

A bonus to the listening of this first book is that the author included a bit of the second book. I would have missed it if I did not shut off my kindle I was using to listen to the book. So keep going as you get to the end. Needs a bit of editing in my opinion to say, “Now for a preview of the upcoming book! “Ennara and the Book of Shadows” It gives the listener something to look forward to. Then give the credits at the end

As others that have read the book. I have to agree that there is a bit of a Harry Potter feel to the story with the main character being a girl. Something I enjoy seeing is a strong female character and I have been seeing a lot of that lately.

The cover of the book is simply delightful. Fits the characters perfectly. I look forward to the release of the 2nd audio book.

A few years ago, I read a book called "The Warded Man", and thought it was one of the most mystical and original books I had ever read.

Angela Myron has managed to bring an equally magical adventure to paper for the pre-teen reader.

One thing that I really like about young adult fiction is the way it grabs the reader quickly and pulls them right into the story. Young adult fiction gets right down to business, and for readers like me who require engagement from page one... it works.

Ennara is an 11 year old with magical gifts, and is not afraid to use them. The fate of a whole society is in her hands, and she does not disappoint. Without a doubt, this book will keep the 8-12 age group engaged. Very well written.

Unfortunately, I need to mention the narration. For whatever reason that I am not qualified to determine, Cyrstal Marcano's performance does not match the author in regards to talent. She is character consistent, and that is no small thing. But there are issues with sentence run-on and monotone dialogue. Did it ruin this great book for me? No. Would I still have listened had I known? Absolutely. Books presented in audible format are enhanced or brought down by a narrator. This novel is in the middle.

Adults as well as the younger reader are going to enjoy this selection. Recommended!