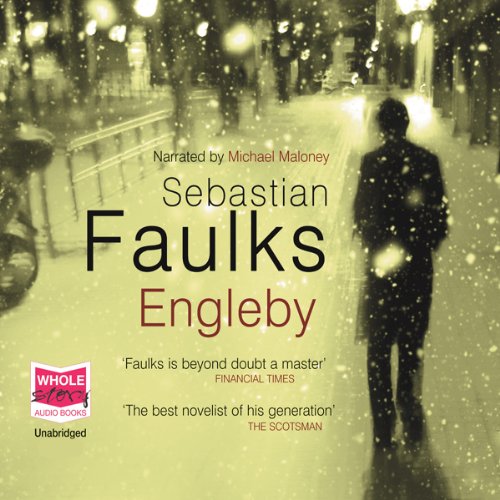 By: Sebastian Faulks
Narrated by: Michael Maloney
Try for $0.00

Mike Engleby says things that others dare not even think. When the novel opens in the 1970s, he is a university student, having survived a "traditional" school. A man devoid of scruple or self-pity, Engleby provides a disarmingly frank account of English education. Yet beneath the disturbing surface of his observations lies an unfolding mystery of gripping power. One of his contemporaries unaccountably disappears, and as we follow Engleby's career, which brings us up to the present day, we are led to ask: is Engleby capable of telling the whole truth?
©2007 Sebastian Faulks (P)2007 W F Howes Ltd
Literary Fiction Psychological
Show more Show less

What listeners say about Engleby

This is without any doubt the best work of fiction I have ever listened to. The book is fabulous, literate and pleasing in every possible way. The narrator does a first class job and clearly understands and enjoys playing Engleby. Memories of this book will stay with me for a very long time.

I love Sebastian Faulks' novels and I have both read other novels of his and listened to other audiobooks written by him which I thoroughly enjoyed. I loved his novels 'Charlotte Gray' and 'Birdsong', and I loved the audiobook of 'A Week in December'. I also quite enjoyed the audiobooks of 'Girl in the Lion D'Or' and 'Human Traces'. But the character in 'Engelby' was so dark and disturbed that I couldn't persist with this audiobook. The narration was probably fine, although I found the lisping cockney accent a bit annoying after a while, but the character of Engleby himself was so mentally unstable and isolated and weird (and he is the sole narrator in this book, so especially as an audiobook you feel yourself being drawn into his mindset which is a bit unsettling) that I couldn't finish this book. I wouldn't recommend it.

An engaging & thought-provoking book, giving an in-depth insight into a disturbed mind. The story carries you along in an absorbing journey.

How to care about a mass murderer

Little by little Engleby reveals himself to be a killer. He also shows us quite bluntly and with no grabbing at the sympathy votes, what has set him on his path and what has kept him there. This rather black tale is told with such wit and self deprecation by Engleby that I could forgive him a great deal. Many thought provoking hypotheses are stumbled around to add stock to the stew of ideas, circumstances and facets of humanity. Gag... the previous sounds very 'uni debate soc' ... sorry. Start again .... I found it to be a rich thick story with a protagonist so totally self involved and honest that I was forced to like and care about an ugly stunted graceless minor crim and murderer. The writing style was concise, well crafted and fluid. It was a joy to find an author who didn't 'buy a car for his auntie with four seats' so to speak. This author obviously went through the ed. system when writing a clear sentence was a basic requirement. Thank you Mr Faulks !

Dark and a little disturbing!

Engleby is one of the most unique books that I have come across. At first I assumed it was about the life of a Oxbridge university student that has made his way from a lower class background. However this story takes a sudden drastic turn where you question the sanity of Mike Engleby.
I really enjoyed how during the first half of the book I sympathised with Engleby, particularly as he seemed to meet unintelligent and self-obsessed people constantly. However you begin to realise, particularly as you start to hear Jennifer's journal, that it seems to be Mike that has the personality problems.
As he struggles to come to grips with reality you feel yourself slipping with him as you listen on, and this feeling that Faulks manages to stir in the listener, really makes this book stand out. Engleby's narrative is so detailed and really allows the reader to envisage his life and experience each moment with him.
I found this book disturbing, melancholy but at times quite humourous. I would definitely recommend this book but be warned it is not a happy listen!

Terrible - In the very best way!

This was my introduction to Sebastian Faulks (I know, I know). To be honest, the first thing that struck me was the quality of the reading which is so well measured against the text. Then comes the narrative - gripping, nostalgic (70's - if you were there)and symapthetic; and a story that unravels in what initially appears to be an obvious way and then changes direction like a waterboatman. Mesmerising.
I have not heard a finer audiobook in the last three years - and I listen to lots. I actually believe that hearing this version, rather than reading the book myself, was a better experience on this occasion.

If you come to this book as I did via Birdsong, then you will find this a very different proposition, but for my money a better book. It's difficult to say much about it without giving away the plot, but to describe this novel as a 'psychological thriller' would be to do it a massive injustice. This is a technical masterpiece by one of the finest British writers alive today. Every word is spoken through the principal character, whom we follow from school through university and beyond. One engages with this single character through formative experiences that are vividly drawn in a dark, but totally credible life. There are flashes of erudition, scenes of dark tension, yet it is often 'laugh out loud' funny. The differences in perspective that other characters bring on Engleby are introduced with great skill. It was only when I finished this book that I realised quite how well it was written and constructed.

This brilliant, superbly written story would not work as an audiobook without a similarly brilliant performance by the reader. I say 'performance' advisedly; Micheal Maloney renders Engelby wonderfully. He interprets the principal character with a deft, pitch-perfect delivery. If there is such a thing as the 'Oscars' for reading audiobooks, then this deserves a nomination.

Despite his strangeness, I unaccountably warmed to Engleby through a narrative that tries to understand one of society's outsiders. Engleby's forthrightness is very engaging and his self-detachment darkly gripping. The book lays its finger on the thin line between social normality and abnormality in an uncomfortable way that leaves its impression on the reader long after you've finished the book.
The reading is superb and this is deservedly one of the top sellers. A must-hear!

Brilliantly read, Engleby kept me transfixed during a long business trip. Michael Engleby's life from the 70's (just before my time but the references were so familiar)is the story of a misfit, a man with no scruples or insight. The feeling of something disturbing ,a secret, lurking just below the surface is palpable. Will Engleby ever reveal the truth to himself? I am so glad I didn't read the book because the way the tale is told is gripping - a fantastic listen.

This is an intense dissection of the mind of a flawed, pedantic and strangely humorous man who is blessed with high intelligence but cursed with the inability to relate to his fellow human beings. Sebastian Faulks is clearly a master of his craft and as I progressed through the tale I found myself reluctantly liking and being appalled by Mike Engelby in almost but not quite equal measure. I confess the ending left me slightly baffled but I think I can interpret a satisfactory conclusion for myself - even though it might not be the right one.
I personally enjoyed Engleby’s interaction with real life people (Margaret Thatcher, Ken Livingstone and Margaret Thatcher most notably) and thought the narrator did a brilliant job of impersonating their voices.
This is not a book that can be listened to while you are doing something else. It requires time and concentration, but for this investment you will be richly rewarded.

Brrr its quite a chilling book. A strong story but it has that added sense of looking at a personality disorder from the inside that came with ?...The Dog in the night?.
It is compelling and excellently read.
I saw Sebastion Faulks at Hay a couple of years back and he has a deep interest in mental illness which is demonstrated in the work. Don?t get the idea that this is a difficult book far from it, like much great literature it is both profound and accessible.
If you find a better audio book than this let me know because I will want to hear it!

This book really sucks you into its main character Mike Engleby and has you thinking, doubting, worrying and sharing his experiences almost as a part of him. It is subtle in its dark undertones and although you might guess the eventual outcome half way through, the telling is still transfixing.

Brilliant and yet wouldn't be rushing to endorse

Cleverly written with a foreboding tone throughout. Captures things very well but the darkness of it all makes it an unpleasant experience overall and therefore not one that I'd be saying, 'Oh you must read this'. If you're in the mood, it's excellent; but there's enough darkness around, so you probably don't need to read/ listen.

It is quite brave on the part of the author to have someone like Mike Engleby as the main character (he certainly isn't a 'hero'), as he is thoroughly unpleasant. Disturbed, deceitful, dishonest, preoccupied with smoking, drinking and taking illicit drugs, Engleby still managed to engage my interest, if not quite my sympathy. He offers no excuses for his appalling behaviour - the reader/listener has to make up their own mind whether he is mad or just bad. A police officer addresses him as "you little s**t" at one point, and I did rather agree with him.
A well-constructed plot with a poignant ending, and an effective evocation of university life in the days when undergrads wore duffel-coats and drank real ale. I'm not sure about the filo pastry, though - I don't think it would have been used for a pub pie until the 1980's.
One thing that did get on my nerves was Engleby's philosophising. It slowed down the narrative, and didn't offer any particularly original or thought-provoking insights. I also couldn't see the point of the episodes where Engleby encountered famous figures such as Margaret Thatcher and Ken Livingstone - the way they were depicted was cliched and caricatured.
Despite the criticisms, I would certainly recommend this book - it's a gripping story, and very well-read.

You can see it coming

Wonderfully written and performed but disturbing tale. Not a great advert for the British education system!

They walk among us.