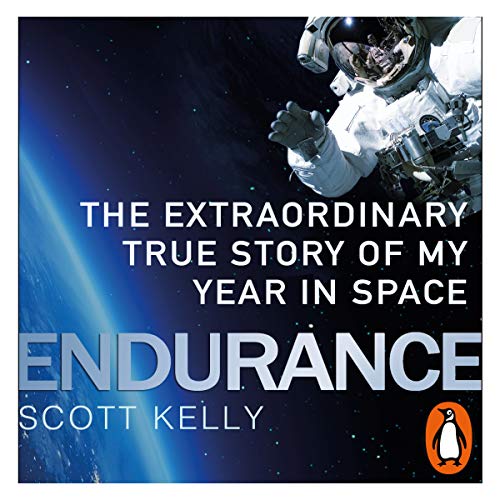 From the NASA astronaut who spent a record-breaking year aboard the International Space Station - what it's like out there and what it's like now, back here. Enter Scott Kelly's fascinating world and dare to think of your own a little differently.

Kelly's humanity, compassion, humour and passion shine as he describes navigating the extreme challenge of long-term spaceflight, both existential and banal. He touches on what's happened to his body, the sadness of being isolated from everyone he loves, the pressures of constant close cohabitation, the catastrophic risks of colliding with space junk and the still more haunting threat of being absent should tragedy strike at home.

From a natural storyteller, Endurance is one of the finest examples of the triumph of the human imagination, the strength of the human will and the boundless wonder of the galaxy.

What listeners say about Endurance

Brilliant insight behind the curtains!

A wonderful read about the early life, steps and a mentality necessary to succeed in any endeavour. Very well narrated by Kelly himself. Will definitely recommend it to my fellow uni space junkies.

Would you listen to Endurance again? Why?
Yes i will read or listen to this book again and again. in my pinion Scott Kelly is the right narrator for this book. i love it when the author is the narrator of their book.

What was one of the most memorable moments of Endurance?
When a gorilla was in space that was great

What does Scott Kelly bring to the story that you wouldn’t experience if you just read the book?
Scott Kelly is the right man to reasd book

Did you have an extreme reaction to this book? Did it make you laugh or cry?
it did make laugh and cry

It is a very engaging story and full of insights into life on ISS. Scott Kelly does a good job narrating. To bad that the audio skips. I dont get how the publisher dont value their own product enough to have some quality control

First audible book I've ever heard📙 loved it!! Would recommend to anyone and everyone 😀

I don't come to space books to hear how to use the loo and how these guys have the right stuff. I come for detail and honesty. Scott clearly has the right stuff but he details everything, things he didn't like little things he loved and where he screwed up. My second favourite spock book to the immortal carrying the fire.

loved it!
Scott provides a real insight to what looks like a sanitized perfect world of being an astronaut in space and in earth. we are human beings after all.

Scott kelly not only gives you a great description of his life, his struggles, how he became an Astronaut but he captures your heart with a story of the human side of him, his thoughts and feelings in all he went through in the years growing up and the experiences he went through being an Astronaut, The good and the bad.
I highly recommend this book, couldn't stop listening since I started.

An excellent story about life in space

Despite coming across as a little arrogant on times I can fully forgive him when you consider his start in live and what he has achieved. A truly remarkable story of a very poor education achievement followed by a ‘divine ah ha’ moment when he read The Right Stuff and suddenly finding a purpose and goal in life.

The details of life aboard the ISS were really interesting and it was so nice to have the author read his own book.

An excellent book and highly recommended.

An intriguing story of endurance

If you could sum up Endurance in three words, what would they be?

This story is a great insight into the commitment, sacrifices and high-risk activities facing astronauts on Earth and in outer space. Commander Kelly takes you on a roller coaster of a journey. His story jumps back and forth, but you soon get into sync with his approach to this book. I was amazed to learn about what goes on behind the scenes at NASA, especially with regards to medical testing. If the NASA nutritionists are reading this, give the ISS crew members more chocolate pudding.

My first read/listen of space from an astronaut, narrated by the man himself.
Enthralling and captivating, a great insight into a man, a dream and goal and overcoming all obstacles to reach that goal.
The Right Stuff is now in shopping a shopping bag, waiting for my ride home while drinking a good IPA.
Thank you to Scott for sharing his journey.

Thank you Mr. Kelly for the great interpretation of an astronaut life. I enjoyed it!

great and worth it. also listen to Tim peake,... but I wasn't enamoured with samantha christoforettis book

A few previous reviews have cited arrogance in response to this book. This could not be further from the truth. Commander Kelly comes across brilliantly from start to finish, and provides truly fascinating insights on life in space - and on Earth - in a way that only someone with his life experiences possibly could. The only arrogant ones here are those leaving such reviews.

I cannot recommend this book highly enough. Simply brilliant from start to finish.

The next best thing to being an astronaut

Such a fascinating insight into the life of an astronaut. Amazing tales of what we take for granted on Earth and what you miss when in space.

excellent account of the practical, technical and personal aspects of being a modern day astronaut.

A fantastic achievement from humble beginnings to spaceman and commander. An inspiration to all. Many thanks to Scott for sharing his life experiences. Loved hearing about the nitty gritty details if ISS life. A great listen.

Interesting but tough to listen to

Luckily this story is so interesting, otherwise there is no way I would have managed to listen to the narrator for so long. I appreciate it’s nice to get the author to narrate the book, but he does so with so little expression and enthusiasm, that together with his strong American accent really makes this tough to listen to!

A life sacrificed & dedicated to advancing the human race into a multi planet species. Thanks very much Scott!

Very inspiring, an amazing story of endurance, trust, friendship, love, & what humans can achieve if we all work together.

Never heard so little enthusiasm in an audiobook. The narrator sounds like he's about to cry any minute.

Kelly provides his readers with a very personal record of his space career, with this book featuring what it is like to live and work on the International Space Station. Kelly describes the people he has lived and worked with, the challenges of zero gravity, and the dangers of life in space. The book is personable, and mostly removed from nasa's notoriously dense lexicon of its own alphabet soup. Kelly discusses his relationships with frankness. Topics of marriage separation and the arrival of new people in his life reminds us that astronauts are after all, human.

Absolutely loved this book! It has so much science, knowledge and adventure in it 🤩 I also really loved how honest Scott was about the hardships and personal relationship experiences he has had.
I found This book Very inspiring and educational!
Loved it!!

An interesting read for space buffs.

There is no doubt that Scott Kelly is an accomplished human being, having achieved something no other American had done. His Scott’s relatively deadpan delivery of his life story interweaved with his year in space is interesting and worthwhile, but it does tend to pale in comparison to the story that he based his title on regarding Shackleon both in the narrative, the writing and the performance. If you are curious about the modern space program give it a go.