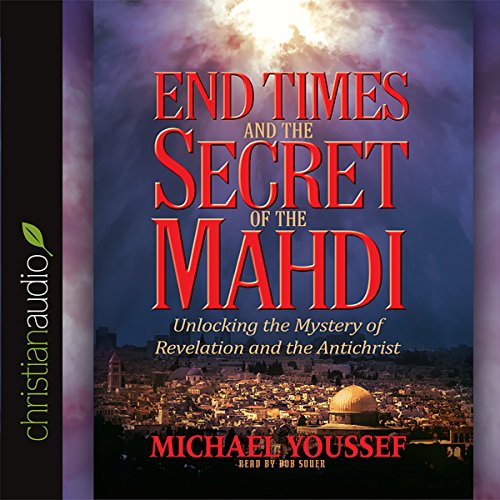 End Times and the Secret of the Mahdi

By: Michael Youssef
Narrated by: Bob Souer
Try for $0.00

Striking parallels exist between the "Beast" of Revelation (the Antichrist) and the prophetic figure in Islam known as the Mahdi. Muslims view the Mahdi as a great savior who will lead a revolution and establish a global Islamic empire over the West. Both the Antichrist and the Mahdi are associated with the end-time and the Judgment. Both possess political, military, and religious power, and each heads up a one-world religion. How this affects Americans today is revealed in Youssef's prophetic End Times and the Secret of the Mahdi.

This book gave me a refreshed viewpoint on end time subjects that I had learned about previously. It filled in some of the blanks for me. I'll listen to it again and again. Each time I listen I get more clarity. I'll also use some of this information in my own home Bible study. Thank you so much for this book. May God continue to bless you, your family and your ministry.

great commentary on Revelations. I like how he touches on the dispensation. which got popular with the Scofield's​ bible in the 1800's.

DR. Youseff's personal experience of growing up in Egypt gives us a rare view of how the Mahdi and Anti Christ match each other. It is informative and convicting. a great wakeup call.

very little was written about the Mahdi... mostly discusses Revelation... but it's always interesting to hear other view points...

The audio for this book is robotic and monotone. I was only able to get through chapter 4 due to the narration. made me very sleepy and uninterested.

held my attention well enough and poses good points that you may consider in your faith and attempted understanding of the end times.

This book should really be titled "An exegesis on Revelation" or some such thing. I don't know why the Mahdi is included in the title. There can't be more than 10 minutes out of several hours total that has anything to do with the Mahdi, and that could be summed up in about 3 sentences at most.
I enjoyed the book, but it's not about a secret of the Mahdi. It's about Revelation.

Huge eye opener and very nicely written and helping others understand what is around the corner.

Very easy to read, understand even if it’s your first book on prophecy. I’ve read all t twice $ highly recommend to everyone!

This was a really great book. Dr. Youssef is instructive as he tells brings in Biblical truths with current events. Recommend HIGHLY.