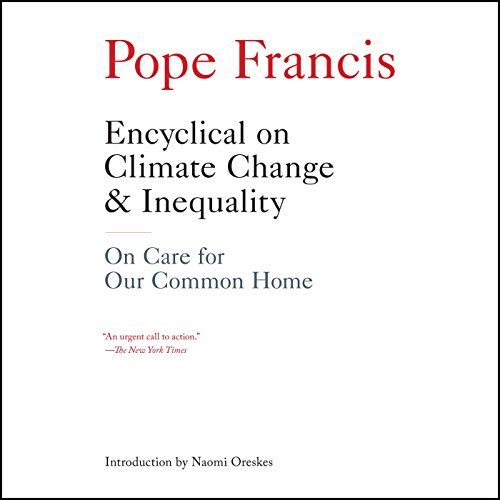 Encyclical on Climate Change and Inequality

The complete text of the landmark encyclical letter from Pope Francis that, as Time magazine reported, "rocked the international community".

In the Encyclical on Climate Change and Inequality, the beloved pope exhorts the world to combat environmental degradation and its impact on the poor. In a stirring clarion call that is not aimed merely at Catholic listeners but rather at a wide lay audience, the pope cites the overwhelming scientific evidence of climate change and does not hesitate to detail how it is the result of a historic level of unequal distribution of wealth.

It is, in short, as the New York Times labeled it, "An urgent call to action...intended to persuade followers around the world [to] change their behavior, in hopes of protecting a fragile planet."

With an insightful and informative introduction by Harvard professor Naomi Oreskes, famed for her best-selling Merchants of Doubt: How a Handful of Scientists Obscured the Truth on Issues from Tobacco Smoke to Global Warming.

What listeners say about Encyclical on Climate Change and Inequality

Every person of good will should read what Pope Francis has to say about our responsibility to care for the common good and our common home.

the book shows a wonderful perspective, in a time our nuclear society is willfully blinded with mud slinging over abortion , imagination, climate and economics.
the human perspective can be regained and the love of God found on the pages within,and at the local church.