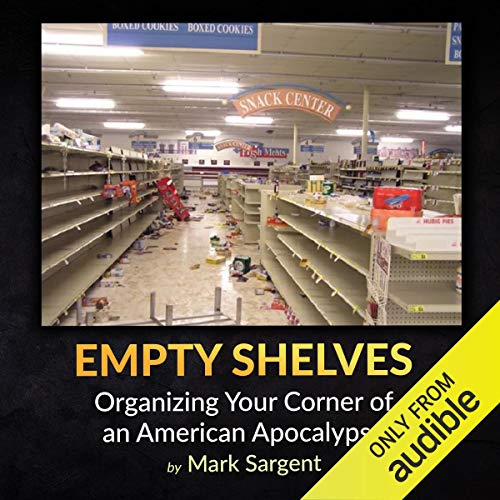 Empty Shelves is your weapon to guide you, the average American, through a national crisis situation. There are those who believe this is already on the agenda and it’s only a matter of time. One day it will happen. If your worst nightmare were to come true - and things that you’ve only ever seen on TV became your new reality - you are going to need some help. There will be some difficult decisions to make in the next 48 hours that will change your life forever. Don’t worry. You’re not alone. You are about to become an 'armchair survivalist'.

Growing up on Whidbey Island, Washington, Mark Sargent started his career playing computer games professionally in Boulder, Colorado. From there he spent the next 20 years training people across the United States in proprietary software. In his spare time Mark enjoyed looking into ‘Conspiracy Theories’ to see if they could be debunked. He resisted the urge but eventually looked at the ‘Flat Earth Theory’ (one of the most controversial of them all) and found that the subject couldn’t be so easily dismissed.

Mark put his thoughts together in a series of YouTube videos as ‘Flat Earth Clues’ which have been utilized by other YouTube creators and seen by millions in some format or other. This bought the opportunity to publish his first book Flat Earth Clues: The Sky’s the Limit which delves into the possibility of our human civilization being inside a Truman Show-like enclosed system and how it’s been hidden from the public since 1956.

The thing is, once you enter ‘the rabbit hole’, you start to see everything around you with a fresh perspective. A whole new realm of possibilities are now in front of you. A bit like in The Matrix - do you take the red pill? Or the blue pill? Do you go back to your comfortable world and believe everything the tell-lie-vision shows you, or do you look deeper?

The film and entertainment industry are forever giving ammunition to these ideas, too. Consider the following movies and shows: Contagion, 24, The Manchurian Candidate, They Live, Enemy of the State, Mad Max, The Hunger Games, Men in Black, Avatar, The Purge, Inception, Children of Men, Minority Report, Altered Carbon, Total Recall, The Island, The Rapture and The X-Files. They show you an alternative reality with a futuristic twist of realism. These shows are like idea viruses. They can leave you thinking ‘what if’....

What if they’ve shown you what is already possible? Where do the writers get these ideas? Are they trying to show us something? Is this predictive programming? Do the ‘powers that be’ have plans to take over the world (as they’re always showing us), and on the day it all kicks off - what are you going to do? This audiobook is a quick ‘how-to guide’ to weather the storm and a good place to start. Stay safe.

What listeners say about Empty Shelves