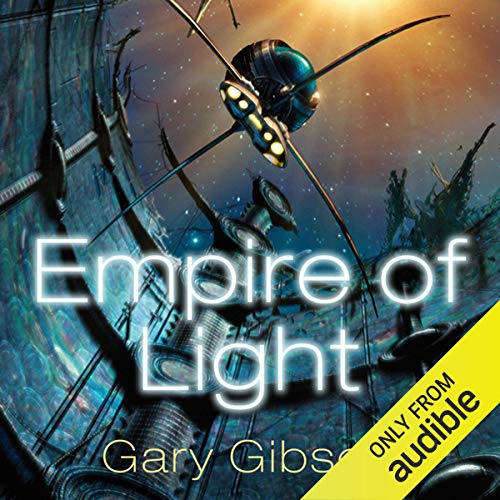 By: Gary Gibson
Narrated by: Charlie Norfolk
Try for $0.00

In the third Shoal book, the nova war has begun to spread as the Emissaries force the Shoal into a desperate retreat. While Dakota goes in search of the entity responsible for creating the Maker caches, Corso, left in charge of a fleet of Magi ships, finds his authority crumbling in the face of politically-motivated sabotage. If any hope exists at all, it lies in an abandoned asteroid a thousand light-years away, and with Ty Whitecloud, the only man alive who can decipher messages left behind by an ancient starfaring race. Unfortunately Whitecloud is imprisoned aboard a coreship adrift in space, awaiting execution for war crimes. But if humanity has any hope of survival, Corso is going to have to find some way to keep him alive - and that's only if Dakota doesn't kill him first.

"Gripping, imaginative and morally complex...adds up to a compulsive read." ( SFX)
"[S]takes his claim to be considered alongside the leading triumvirate of British hard SF writers." ( The Guardian)
"A violent, inventive, relentlessly gripping adventure ... intelligently written and thought-provoking." ( The Times)

What listeners say about Empire of Light: Shoal, Book 3

Good but a rushed conclusion

Long build up to a very anticlimactic conclusion. not sure what else I can say

lost it for me

first book was great, 2nd book was good. now the 3rd book just lost it for me. I just could not get to love or like the people in the 3rd book maybe it's just me!

Like a lot of threequels, this read isn’t for those who haven’t already digested the previous installment novels. Not only do many of the background conflicts and events rely on an understanding of those books, but the history between the major characters is found there, too. This is no criticism, however. A lot of series these days try too hard to be a ‘big tent’ for an expanding readership, that early chapters drag with exposition and ‘catch-me-up’ material. If Tolkien felt compelled to do this, he would have needed another hundred pages. I personally prefer when authors treat the reader with enough respect to trust us to remember (or re-read) important previous material- that’s what all the fan Wikis are for, right?

No, my peeve with this story is that it starts off extremely promisingly, with a collection of characters and motives that are all appealing, both new and returning, with those in the latter category having undergone substantial personal evolution between novels. They are drawn together and undertake a hero’s journey in the form of an expedition into hostile alien territory, further outside of human space than anyone has ever traveled before. And then, with this spectacular set up, the remainder of the story devolves into a finger-pointing mystery among the characters to uncover the infiltrator in their midst. This would have been welcome in a moderated dosage; a sideplot that allows the greater focus to move on to more wondrous, alien, Space Opera, big concepts. However, the story really spiraled into one betrayal after another, and while this kept the tension and action quite high, I feel like it missed an opportunity to accomplish both of those things more engagingly using external threats. It’s possible I feel this way only because of how stupendous the epilogue was in this regard, and it reminded me of all the things that later half of the story proper missed. While this bodes well for my enjoyment of the 4th installment novel, Marauder, it did cause my attention to drift at moments.

What made the experience of listening to Empire of Light: Shoal, Book 3 the most enjoyable?

The characters developed are real rich and deep but only after reading the first two books.

What was one of the most memorable moments of Empire of Light: Shoal, Book 3?

When a certain character died, I was much like the main character, feeling nothing but hollowness.

Seeing Dakota activate the Meridian drones on the water world for the first time.

Its a good ending to the series of books with an opening for another series and I was left wanting more, to start a new adventure.

Gary Gibson is a new author to me. Heard about some of his stories a while back but couldn’t get in to them. I’d heard good things about the Shoal series and WHAM! I was hooked!

No spoilers. But if you try one new author this year give GG’s Shoal Series a run.

Also, a shout out to the narrator, Charlie Norfolk. Good job! A difficult set of characters and a job well done.

I've enjoyed this trilogy - a great epic space opera with loads of alien tech, action and well written characters - but, unfortunately, this final part lost some pace and depth for me. All the colourful villains, ships and political intrigues got left behind (literally) as the core characters went off in search of the Big Weapon; and the journey just lasted way too long I'm afraid. I'd still recommend the series - it's brilliantly narrated - but only as a fun slice of scifi escapism.

i love this trilogy. Hat off to GGibson.

it took a while to get used to the narrator; and i never thought of the main character as Scottish.

Such a great series and great narrator

Really enjoyed all three books. The pace and story of this chapter was more people's views and more closing in on the goal.
The passion and voices Charlie brought really added and brought it to life.
Only tiny issue I have now it's over and I didn't think while reading it as its all a mystery is did they do the right thing. The almost didn't know what they were aiming at they got sucked along by bigger issues. So it might have been nice to here the story of the bad characters more to see why the wanted their actions and if they succeed or failed. Not a let down just a thought.

Great for my daily commute, not the greatest Sci Fi, nowhere near the class of Iain M Banks for example, but a rollicking space opera that across three books, of which this is the third, pulls you along and leaves the door open for more books at the end. Driving the car you need something with a clear narrative and which can have a few lapses of concentration without spoiling the story.

Have finished all three books in the trilogy and enjoyed the ride! This was good space opera with clever world building and an impressive scope. However, this third installment was a bit thin. We have seen most of the character development in the previous episodes and I found Dakota had lost some of her edginess. I'm not disapointed, however this did lack some of the itensity of the other two novels. Apparently there is another trilogy in the pipeline, so Mr Gibson might have been more concerned with setting the scene for the next installment. As far as the narration is concerned, after 3 novels I've had enough of Charlie Norfolk, who does every male voice in a very annoying American western-style drawl. I kept imagining them all wearing cowboy hats and spurs!

What the hell happend?

What started as a good "space opera" reading, with good plot, very interesting characters and grand setting, half way trough become chore to listen. Lack of logic, inconsequence's, repetitions and trivial dialogues. Like from "I have an idea for the best story in my life" to "let's finish it quickly I don't care any more". What a waste. My favourite SF author, S.Lem, wrote book which consist of reviews of never written books. Sorry Mr Gibson, that's where your story belongs.