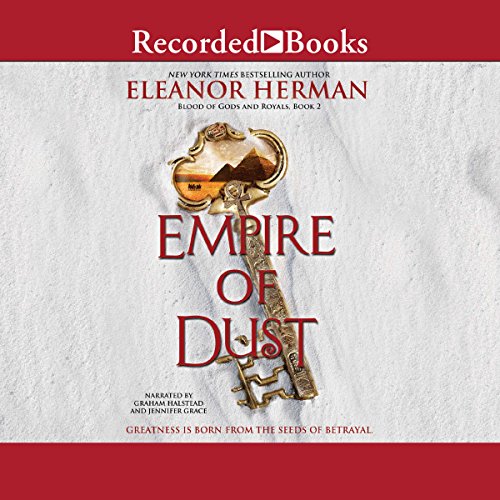 By: Eleanor Herman
Narrated by: Graham Halstead,Jennifer Grace
Try for $0.00

In Macedon, war rises like smoke, forbidden romance blooms, and ancient magic tempered with rage threatens to turn an empire to dust.

After winning his first battle, Prince Alexander fights to become the ruler his kingdom demands - but the line between leader and tyrant blurs with each new threat.

Meanwhile Hephaestion, cast aside by Alexander for killing the wrong man, must conceal the devastating secret of a divine prophecy from Katerina even as the two of them are thrust together on a dangerous mission to Egypt.

The warrior, Jacob, determined to forget his first love, vows to eradicate the ancient Blood Magics and believes that royal prisoner Cynane holds the key to Macedon's undoing.

And in chains, the Persian princess, Zofia, still longs to find the Spirit Eaters but first must grapple with the secrets of her handsome - and deadly - captor.

New York Times best-selling author Eleanor Herman entwines the real scandals of history with epic fantasy to reimagine the world's most brilliant ruler, Alexander the Great, in the second book of the Blood of Gods and Royals series.

What listeners say about Empire of Dust

Book 2: Addicting and intriguing YA fantasy

Did Graham Halstead and Jennifer Grace do a good job differentiating all the characters? How?

Jennifer Grace did a much better job narrating book 2 than book 1.

I listened to Legacy of Kings and Empire of Dust back to back on my free time and did not want it to end. A great continuation of series, gets better,more revelations and surprises. Beginning development of some romantic relationships .Characters harnessing their magical powers and political intrigue.The author's does a great job blending actual history, fact and fantasy together to create a magical and likeable Alexander the Great. The different POV did not distract from the story but added more spice to it. Wow, the ending of book 2 promises a lot in book 3. Leaves open a lot of potential with characters development, relationships and exitement! Well writen YA fantasy,definitely a series worth listening to if you like fantasy, magic, action and a touch of romance. Strong female characters who can wield a sword/KSA and swoon-worthy heroes.