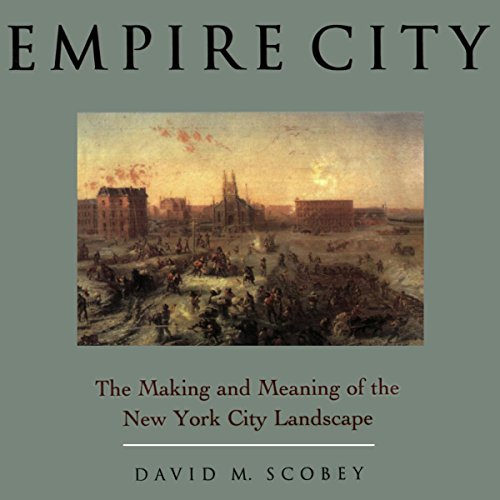 The Making and Meaning of the New York City Landscape
By: David M. Scobey
Narrated by: Jim Feldman
Length: 11 hrs and 40 mins
Categories: History, American
2 out of 5 stars 2.0 (2 ratings)

For generations, New Yorkers have joked about “The City's” interminable tearing down and building up. The city that the whole world watches seems to be endlessly remaking itself. When the locals and the rest of the world say “New York”, they mean Manhattan, a crowded island of commercial districts and residential neighborhoods, skyscrapers and tenements, fabulously rich and abjectly poor cheek by jowl. Of course, it was not always so; New York's metamorphosis from compact port to modern metropolis occurred during the mid-19th century.

Empire City tells the story of the dreams that inspired the changes in the landscape and the problems that eluded solution. Author David Scobey paints a remarkable panorama of New York's uneven development, a city-building process careening between obsessive calculation and speculative excess. Envisioning a new kind of national civilization, “bourgeois urbanists” attempted to make New York the nation's pre-eminent city. Ultimately, they created a mosaic of grand improvements, dynamic change, and environmental disorder. Empire City sets the stories of the city's most celebrated landmarks - Central Park, the Brooklyn Bridge, the downtown commercial center within the context of this new ideal of landscape design and a politics of planned city building. Perhaps such an ambitious project for guiding growth, overcoming spatial problems, and uplifting the public was bound to fail; still, it grips the imagination.

"This is an excellent book: It is meticulously researched, full of insights, and beautifully written." ( Business History Review)
"Scobey has written a brilliant, evocative account of New York on the brink of economic and social chaos." ( Journal of American History)

Written from a Marxist Point of View

The author notes in the introduction that he writes his history through a Marxist world view, so I had fair warning.