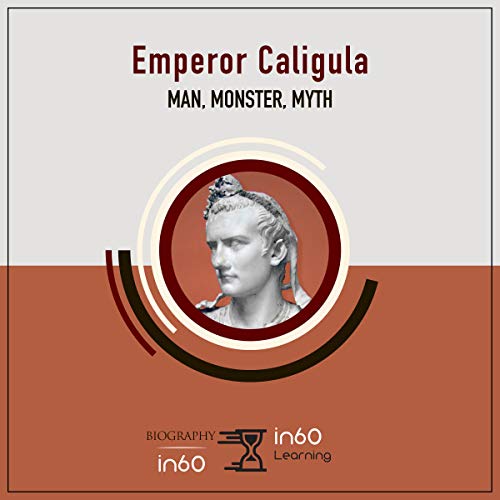 Get smarter in just 60 minutes with in60Learning. Concise and elegantly written nonfiction audiobooks help you learn the core subject matter in 20 percent of the time that it takes to read a typical book. Life is short, so explore a multitude of fascinating historical, biographical, scientific, political, and financial topics in only an hour each.

All major historians agree that Gaius Caesar Caligula ruled as a depraved, cruel, and ruthless emperor. Yet some discrepancies in the historical accounts raise questions about what was true and what was libel intended to discredit Caligula as an utter raging, evil madman. This audiobook reexamines the evidence to reveal the exaggerations of history while still detailing the verified truth of Caligula’s monstrous ways.

An attempt on Caligula’s life seven months into his reign split his three years as emperor into two distinct categories: peaceful bliss and rampant cruelty. Despite his assassination after only three years, Caligula’s time as emperor left a scar on the Roman Empire that would forevermore remind the Romans that power breeds corruption.

A Look at Caligula

This was an interesting listen about the short reign of Caligula. Sadly, the only ones who know what truly took place during this young man's rule lived during the time. There are stories but no one knows just how much is actual truth and how much has been made up. Some facts have survived through the times but not enough. This book highlights Caligula's life and deeds but does not go into any sort of sordid or grotesque details of said deeds. The narration was well done and made listening to this story quite enjoyable. Like a few other reviews I have left, this book was gifted to me as a holiday gift from in60Learning and no review was requested. Thanks in60Learning for making learning fun and giving points which can be used for further research if desired. Keep up the wonderful work!