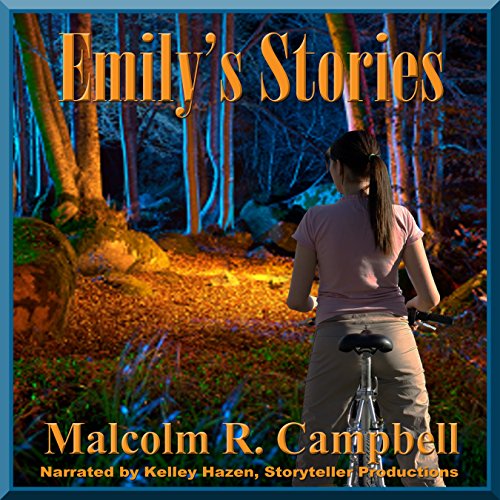 By: Malcolm R. Campbell
Narrated by: Kelley Hazen
Try for $0.00

Emily Walters is a sharp, inquisitive fourteen-year-old north Florida girl who loves maps, her rusty old bike, and the forest behind her house. Sometimes her dreams tell her the future and sometimes her waking hours bring wise birds and other spirits into her life. In these three short stories, join Emily in her adventures and mysteries.

When her family vacations in the mountains in “High Country Painter,” a wise Pine Siskin tells her she must quickly learn how to paint dreams into reality to prevent an afternoon hike from becoming a tragedy. In “Map Maker,” she'll need her skills-and the help of a Chuck-will's-widow-to a fight a developer's plans for from bulldozing the sacred forest behind her house and replacing it with a subdivision. In “Sweetbay Magnolia,” she'll learn the secrets of her grandmother's favorite tree, the crumbling almost-forever house down on the river, and why some ghosts would rather visit than haunt.

What listeners say about Emily's Stories

Emily's Stories was a nice change from the darker paranormal I usually read. It contained 3 sweet stories with likeable and relatable characters that I thoroughly enjoyed. Kelley Hazen once agaon does a fabulous job at bringing the characters and story to life. I never hesitate to get an audiobook when I see her as narrator. I look forward to more from this Author and Narrator

Emily's Stories by Malcolm R. Campbell was a good quick read. This book contained three short stories about Emily Walters in adventures and mysteries. Emily is a fourteen-year-old girl who enjoys her bike, the forest behind her house and maps.

Emily's Stories by Malcolm R. Campbell and Kelley Hazen (Narrator) is an audio book I requested and the review is voluntary. This book is a touching book about an extraordinary girl with paranormal gifts that she gets from her Grandmother. Her father doesn't know she has them. There are three stories that blend together. One is of a wise birds and spirits that teach her how to paint what she needs from imagination into reality. This comes in handy to prevent tragedy. She needs to find a way to prevent contractors from plowing up the wildlife and land behind their house. She wants to save the land and animals. She has unexpected help. In the last story, she finds out why an old tree is a favorite of her Grandmothers, a very touching story. I enjoyed them all. A book for teens, young adults, or anyone with a heart. The narration was perfect to go with this story also.

I recommend this audiobook more than any other

I like it when kids are smarter than adults in stories like this. It gives me hope. The author 's writing had a 'Peter Pan' feel to it - not that it reads like 'Peter Pan' but it's a kid being powerful and doing something positive. And there is also a magical 'The Secret Garden' kind of feel in here.The kid is powerful because she can see &amp; hear the beauty and the magic in Nature. This audiobook has the coldest, scariest ghost voice in the world and also the wonderful open, free and uninhibited voice of 'Emily'. AND the voices of birds and much more. The widest range of voices I've heard from a narrator. And all seemed real, not forced. I believed it - I believed this could happen.

what a beautiful, beautiful story

This is one of the most stunning stories for young people I've ever heard. In fact any adult would love it to. Laced with compassion and empathy this is must listen for every young person. I would think this would make an excellent project for a classroom group listening project or for any program looking for a project centered around social and emotional learning. The three books take us through a journey with young Emily as she awakens to the world of Nature and magic and her own personal strength. I chose it for my young niece and we listened together. It will be a special memory for us forever and she plans to hand it down to her daughter someday.

A sweet YA paranormal fantasy story

I thought this was an interesting paranormal fantasy story. The stories are all rather short, and a little too sweet for me, but enjoyable. The painting dreams into reality thing was cool. Definitely geared towards younger audiences.

Nicely written. these stories paint a vivid picture of Emily and show an interesting young lady. I enjoyed the glimpses into her life, the three stories blend together and show an unique view of the world.

A good book for young adults as well as adults who want something light and interesting.

The narration is well done, the voice for Emily really suits her. The narration flows smoothly except for a couple of instances where the audio repeats and where edits have been made where the sound is a little different. These are minor an easy to ignore.

If you found this review helpful would you please take a moment to click yes below, thanks

an excellent book for young adults and others

Emily is an active smart fourteen-year-old with unique gifts.  She can speak with animals and learn from them, visit with ghosts who simply want to sit and chat for a while, sometimes she can paint pictures that become real and sometimes, her dreams reveal her future.  A map-maker and savior of the ancient forest, Emily shares three stories of her adventures during one summer.

Malcolm Campbell creates a collection of adventures and shares them in a simple yet authentic manner.  He uses dialog and vivid descriptions playing on the memories we all have of our youthful summers.  While the stories are short and sweet, they are packed with memories and childhood escapades.  Each character is well developed and connected to the area sharing similar beliefs that Emily and her father share. Malcolm Campbell is a masterful story teller.

Kelley Hazen performs the narration in a solid voice that is exhilaratingly fresh and young and old sounding as appropriate.  Her accent is accurate and captures the essence of each character perfectly.  I found her voice mesmerizing and comforting at the same time.

My only complaint about this audiobook is that it is too short!  I would love to hear more of Emily and her family but in longer pieces.  But this is an excellent book for young adults and others who just want to reminisce.

There were no issues with the quality or audio production of this book.