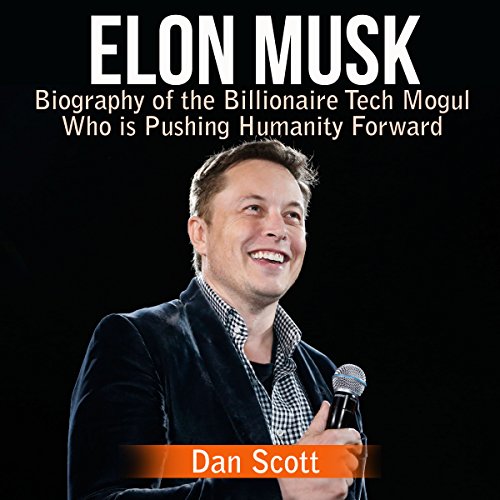 By: Dan Scott
Narrated by: Kevin Theis
Free with a 30-day trial

Elon Musk is a South African-born Canadian-American business magnate, investor, engineer, and inventor. He is the founder, CEO, and CTO of SpaceX; co-founder, CEO, and product architect of Tesla Inc.; co-founder and chairman of SolarCity; co-chairman of OpenAI; co-founder of Zip2; and founder of X.com, which merged with Confinity and took the name PayPal. As of February 2017, he has an estimated net worth of 13.9 billion, making him the 94th wealthiest person in the world. In December 2016, Musk was ranked 21st on Forbes list of The World's Most Powerful People.

Musk has stated that the goals of SolarCity, Tesla, and SpaceX revolve around his vision to change the world and humanity. His goals include reducing global warming through sustainable energy production and consumption, and reducing the risk of human extinction by making life multiplanetary, by setting up a human colony on Mars.

In addition to his primary business pursuits, he has also envisioned a high-speed transportation system known as the Hyperloop, and has proposed a VTOL supersonic jet aircraft with electric fan propulsion, known as the Musk electric jet.

What listeners say about Elon Musk

If you're a follower, there's nothing new here.

If you are tech enthusiast and/or follow tech news moderately, you won't find anything new in this book. This book mostly covers very basic details of Elon's life, things that you can find in his Wikipedia page or simple Google searches. And similar details are also available in various YouTube videos. Hence I wouldn't recommend anyone to pay for this book. If you are getting it for free though, go for it.

"Elon Musk: Tesla, SpaceX, and the Quest for a Fantastic Future" by Ashlee Vance.

Would you listen to another book narrated by Kevin Theis?

There was no problem narration-wise. Hence I am not opposed to listening to another book narrated by Kevin Theis.

A small peek into Elon's success..

This short book is a combination of what he's accomplished, what he's trying to accomplish, and what's happened in his personal life. I was hoping for more detailed information on how he made his Billions. The most interesting thing about this book to me was the work he's doing with environmentally safe transportation. For someone seeking basic knowledge about Elon this is a good place to start. For those wanting an inside look into the mind of a money making genius you won't get it here. I requested this free review copy and have decided to voluntarily leave this review.

This quick listen is primarily a reading of Elon Musk's resume. If you've listened to his biography, and want a quick refresher, this would work. If you really want interesting information about Elon Musk, listen to his full biography. This is a little dry.

If you don’t know much about this man, you will be forgiven for about five more minutes. He is a first rate technological genius and probably a new-age, alien-loving, Marsian wannabe. Next time you use PayPal or see a Tesla or plan a vacation on another planet, you will have this African dude to thank. The narration was excellent as always with Kevin Theis. I was given this free review copy audiobook at my request and have voluntarily left this review.

I really enjoyed this short bio of Elon Musk. I have to admit, I really didn’t know much about him before listening. Now I feel like I can have an intelligent conversation about his many accomplishments. I was given this free review copy audiobook at my request and I have voluntarily left this review.

After this, I am 90% sure Elon is a supervillan

I remember reading a headline about Elon Musk when he started selling actual flamethrowers. Then I had a chance to listen and review a book about him so I jumped at the chance. This guy, I cant decide if he seems more tony stark or more dr. evil. On one hand he dose so much good I cant help but respect the man. On the other....if someone told me the man had a moat of lava around his house I would be surprised, but I wouldn't really question the validity of it. The world is better for having this man in it and as far as biography's go I Highly recommend this one.


Dan Scott has written a really good, very brief overview of Elon Musk. I don't believe in many of the things he does but it is interesting all the same. He is definitely eccentric and the timing of this being released on audio is timely (having just recently launched a rocket containing his Tesla 2018.)

*I received this book in exchange for my unbiased review. (I also was gifted a book about Tina Fey by the same entity that I forgot to acknowledge in an earlier review.)

Please take a moment to rate my review by choosing 'helpful 'or 'not helpful'. I invite you to follow me on Audible to read, share and read my latest reviews. Thank you.

What You Need to Know About Elon Musk

A very high level synopsis of what he's accomplished. Given the length, it doesn't have time to get into what makes him tick, although I suspect that in the long run, that would be a far more interesting story.
Worth a look for anyone interested in keeping up with what's happening in the world today.

Hard to listen to.

I found this book very hard to listen to. My husband listened to it with me. His response was that the story didn't tell us anything that was has not already been in the news. The one thing good about this book is it's short. I was gifted this book with the understanding I would leave an honest review.

A Great Primer on a Great Man

If you want to get the distilled essence of Elon Musk's longer form biographies out there, this is a great choice. You'll come away with a better understanding and appreciation for Musk - where he came from, what he's doing today, and where he's going.