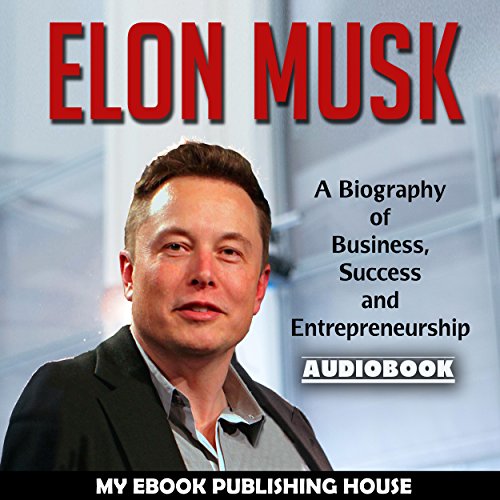 By: My Ebook Publishing House
Narrated by: Matt Montanez

This book will offer you the most extensive introduction to Elon Musk. You are going to learn what made Elon Musk such a successful figure.

Feeling unmotivated? Feeling uninspired? Needing a role model? If that is the case, this book is definitely for you!

Musk is a symbol of the American dream, despite not being American. He is truly self-made, working his way through college and starting his first business in time to take advantage of the burgeoning Internet scene to become a millionaire before the age of 30.

Unlike many people who might think that was enough, Musk instead put his money into another startup which quintupled his net worth when his company was purchased by eBay. From there he went on to become the CEO of two companies which are each worth $1 billion. Do yourself a favor; learn from what Musk has done, and listen to this book today.

In this book, we will look at Elon's story and find out exactly how he has gone from a young man raised in Pretoria, South Africa to become a truly one of a kind businessman and genius-visionary who's boundaries are seemingly unlimited.

Musk has stated that the goals of SolarCity, Tesla Motors, and SpaceX revolve around his vision to change the world and humanity. His goals include reducing global warming through sustainable energy production and consumption, and reducing the "risk of human extinction" by "making life multiplanetary" by setting up a human colony on Mars.

Order your copy of this fantastic book today!

I cannot believe that a person like Elon Musk would allow his book to e read by this narrator. He is just .... too green / not prepared.

Details are in brief

Details are in brief, need some more information about Elon musk and his ventures, his early days and any struggle during starting up of these world class ventures