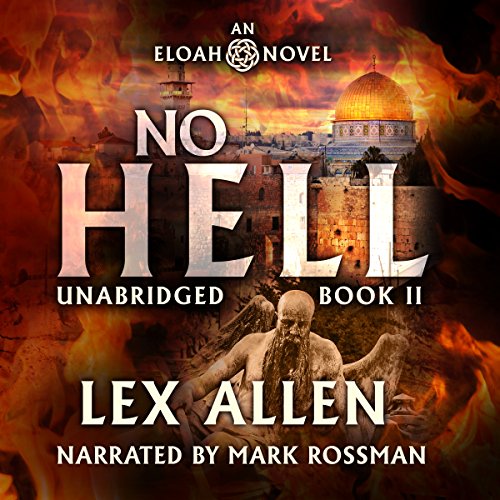 An ancient secret is revealed after 2,000 years.

Destruction at the Temple Mount ensues.

An epic battle between good and evil is underway, and the survival of the world’s population hangs in the balance.

Eloah works for the support of the American president, and to convince the Catholic pope of the truth of his reincarnation and of his connection to the Church’s foundation. Eloah’s followers search for evidence, hidden for two millennia, which will substantiate his claims. Also joining Eloah on his mission are three druids from a faraway galaxy, who crashed-landed on Earth many millennia ago.

All the while, Alpha, a bacterial hitchhiker on the druids’ spacecraft, sees its plans for world domination crumbling and is hell-bent on stopping Eloah and his followers, regardless the cost.

Evolved Publishing presents the second thrilling and intriguing installment in the Eloah series of religious conspiracy thrillers. Journey on a new discovery of the historicity of Jesus.

What listeners say about Eloah: No Hell

This book will blow your mind after it stretches your mind, bye now all of you must be just as worried as I am. I like this book because it stretches the mind makes you think of other things and other ways of the Lord. I would recommend this book to everyone

I did enjoy listening to Mark Rossman. Perfect for this great book. We have great characters and story. Having being married and having a normal life , even though her start was far from that. After Kit finds her husband with another woman. She runs, with her twin brother, right back into the life she left behind. The past catches up , will Kit take a chance on a love she's always wanted or go back to her husband?