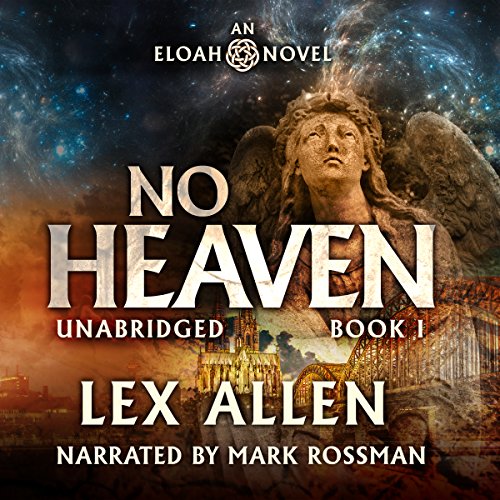 Our world will never be the same.

Earth - rife with political corruption, corporate oligarchy, and religious fanaticism - stands at the precipice of a nuclear world war that could destroy us.

Eloah, a philosophy teacher from a parallel universe, returns to help, but first he must reach the hearts and minds of the people, and resolve the fundamentalist misinterpretations that created our religions. To accomplish his mission, he enlists the help of three old friends who knew him in a previous incarnation...2,000 years ago.

Eloah's public announcement and display of supernatural abilities in Cologne, Germany, followed by a shooting at the Lincoln Memorial in Washington, D.C., sparks a flurry of activity. His enemies gather quickly, ranging from government agencies, to the Vatican, to a fanatical detective.

Yet none is more dangerous than an evil being with powers equal to those of Eloah, one intent on turning the world into his personal playground, crushing all who stand in his way.

What listeners say about Eloah: No Heaven

No heaven no way

Not a book I would typically pick up based on the synopsis but I’m no book snob, and thank goodness for that or it would have been a big loss! The characters are relatable and draw you in very quickly. Religious preference or lack there of should not deter anyone from reading this. It’s a story that makes you think and wonder aloud. I can’t wait to read the next one.

Narrator is great and the story is better. highly recommended.

I am definitely buying a part 2

I am a practising Christian and could relate to the story loosely based around Jesus, very enjoyable looking forward to book 2

Cross Or No Cross

I loved this book and enjoyed the narrator. This book may push some people's buttons and others to say Ahh yes.

I was hooked from the start.
The author takes a the idea of Jesus and changes a history and what could happened, not just at the time of the Crucifixion, but throughout the course of human evolution.

I fell in love with the characters.

Have an open mind and enjoy