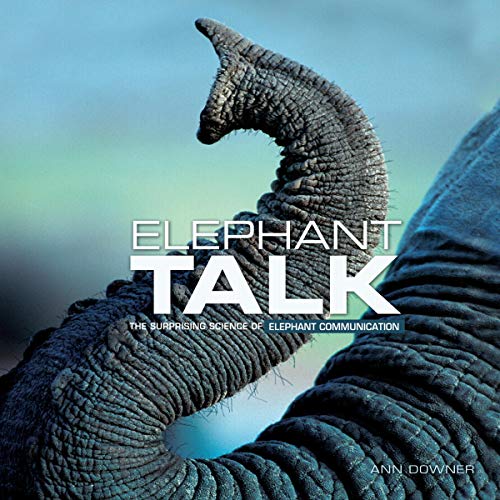 By: Ann Downer
Narrated by: Intuitive
Try for $0.00

On a hot day in the African savannah, a group of elephants searches for food. While foraging they often lose sight of one another. Yet at the end of the day, in one coordinated movement, the elephants suddenly regroup. This coordinated movement - and others like it - has puzzled scientists and caused them to question how elephants communicate with each other.

Since the 1990s, scientists have gathered significant data on elephant “talk.” Biologists have determined that elephants use a complex system of communication of at least 10 distinct sounds, combined in many variations. Researchers are now asking: what do these sounds mean?

As scientists study the elephant sounds that humans can hear, they are also identifying ways elephants communicate through nonverbal behaviors and making sounds too low for human ears. Scientists have realized that elephants even receive messages by using their sensitive feet to feel vibrations in the ground. All of these discoveries are helping elephant researchers better understand elephant behavior.

But the elephant’s time as a wild animal is running out. Threatened by habitat loss and illegally hunted for their ivory tusks, elephants are on the brink of extinction. Will understanding elephant talk be the key to saving the species?

"Downer provides an engrossing account of the science of elephant communication, covering elephant social networks, the workings of their vocal equipment, and what we know about the sounds, smells, and various behaviors they employ. Prominently linked to the detailed scientific information are the researchers who investigate it." (The Horn Book Guide)

"The complex behavior of wild elephants is introduced in a flowing narrative.... Downer provides an overview of elephant evolution, places the creatures in their African and Asian contexts, and describes the lives of these intelligent social animals. Her narrative then focuses on the elephants' intricate verbal and nonverbal communication techniques, the physiology that enables them, and the studies and experiments scientists have conducted to learn more.... A chapter on the elephant-human relationship contains interesting historical facts and important current information about the efforts of people to ensure the survival of elephants. Throughout this highly readable, informative title are profiles of individuals - an elephant keeper, a scout, researchers, and others - who work with these animals. The 'Elephant Dictionary' will help future scientists understand an elephant's chirp, grunt, rev, rumble, and snort!" (School Library Journal)

"Elephants are very social, extremely chatty animals. These conclusions are supported in this book by observations [and] technologically enhanced field research.... In addition to their 70 plus vocalizations, elephants use various ways of walking as well as their trunks, ears, tails, feet, and urinary glands to communicate. These remarkable creatures are endangered because of loss of land, conflicts with farmers over crop destruction, and tusk stealing poachers. Readers learn about programs that are reducing human/elephant conflicts and resources that suggest ways to support elephants. This excellent book provides all the material needed for a report, or for an enjoyable browse." (Library Media Connection)

What listeners say about Elephant Talk