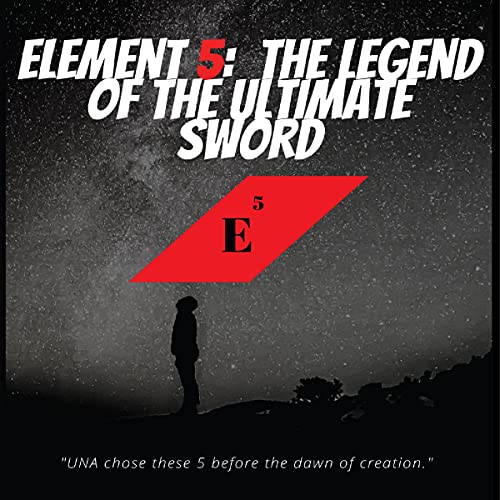 By: Lemuel R. Reaves
Narrated by: Brandon Woodall
Try for $0.00

Across the stars, in the far distance of the galaxy, the Spirit of the Universe, Una, finds herself at odds with her nemesis, Oblivion, a powerful sorcerer hell-bent on destruction and domination of the universe. Their fight over the many solar systems reached its peak when the dark sorcerer set his eyes on planet Earth. With time running out and Una’s energy being limited, she has no choice but to assemble a team: a group of individuals who are brave and strong enough to fight back against the growing darkness.

Bringing together five people, she grants them superhuman powers combined with the elements of the Earth. With wind, fire, metal, earth, and water granted to her fighters, they become Atmos, Blaze, Metallika, Boulder, and Aquious, and thus Element 5, aka, E5 is formed. Training them under her guidance, Una knows she has a fighting chance. But, fighting evil never comes easy.

Within Earth itself, there lie many weapons that contain considerable power. Not only will E5 have to protect them from Oblivion, but other enemies as well, as the mad scientist, Metallik, thirsts for the swords of power. He is not alone. With him are the former protégé of Oblivion, Con and Septura, two monsters highly skilled in the dark arts. With their combined strength, they pose a threat for E5.

The battle is on as good and evil collide for the survival of the human race. Will Una be able to stand against Oblivion’s growing power or will the dark sorcerer have the last laugh?

What listeners say about Element 5