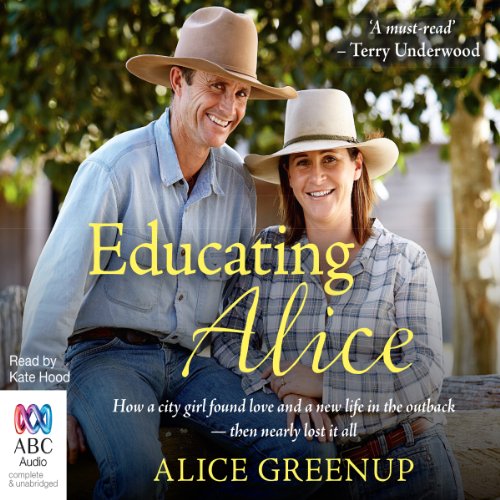 What really happens when a city girl becomes a farmer′s wife? If you′re a fan of Rachael Treasure, you′ll love this memoir: a real-life outback love story that proves truth is even better than fiction...

A footloose city slicker who couldn′t tell a bull from a cow was hardly the ideal candidate to answer an ad for a governess on a Mackay cattle station. But Alice Greenup was game for anything, until she was bowled over by a handsome young jackeroo with a devastating smile. It was the start of a whole new way of life as Alice gave up her city life to embrace the bush and all that came with it: horses, cattle, the obsession with rain - and the correct way to wear a hat.

After overcoming more than a few obstacles, the unlikely couple eventually married, moving to Rick′s family farm near Kingaroy. Determined to make their own future, they gambled their dreams on a vast property called ′Jumma′. It was a huge risk but with a lot of love, blood, sweat and tears, they were on their way.

But one morning they almost lost it all. When Alice′s horse bucked her out of the saddle in remote bushland, she was gravely injured. Rick was forced to leave her lying alone, drifting in and out of consciousness, to gallop home for help. What followed would test their love to the limit.

I listened to this book in one day

Although I felt it started out a little slow by the first hour or so I was suckered in and I ended up listening to nearly the whole book whilst behind the wheel of a truck I one work day. Then found myself listening to the last hour and and half while laying in bed before I went to sleep. These people really have done amazing things with the blood sweat and tears of hard work.

Loved this book, it is for everyone. From survival to prosperity, from travel to the journey inside oneself, this story is candid and full of real life. Great piece of Australian history of how and why we live where we live. Great piece of work and excellently narrated with the swaggers in the accents.