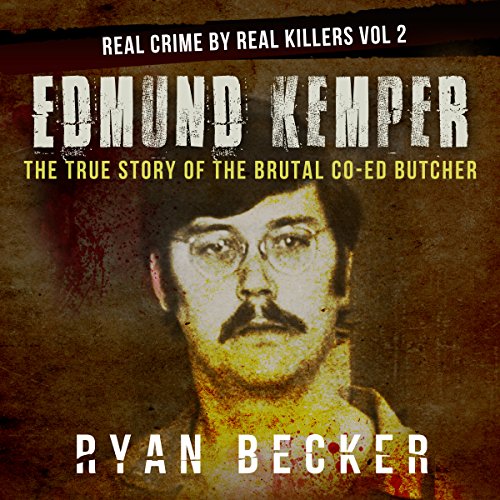 By: Ryan Becker
Narrated by: Jason Fella
Try for $0.00

Edmund Emil Kemper III achieved notoriety as a serial killer when he took the lives of 10 people between August 27, 1964, and April 21, 1973. His victims included his adoptive grandparents, six co-eds from the University of Santa Cruz, his mother, and his mother's friend. This book explored the life of Kemper from his abusive childhood to his sentencing in November 1973. The horror of Kemper's actions go beyond the killing of his victims; it was what he did with his victims' bodies after killing them. Necrophilia, cannibalism, and dismemberment were all part his routine in his attempts to satiate his morbid desires. Just as terrifying as his dark fantasies were his ability to appear and function as an average person, allowing him to avoid raising suspicion in those he interacted with, including law enforcement. Contrary to the myth that serial killers kill indiscriminately, Kemper's killing spree may have been rooted in the hatred that he felt for his mother. In an interview after his capture, he admitted that he was intentionally developing his killing skills with each co-ed that he killed. He was training for the ultimate murder, which was the killing of his mother. From beginning to end, the book provides insights to why Kemper became a serial killer as well his mindset behind the killings.

What listeners say about Edmund Kemper

I really liked the way this book tells the story and how it captures your attention, not disappointed at all.

Very poorly written and repetitive. I would have been better off just reading Wikipedia to save time.