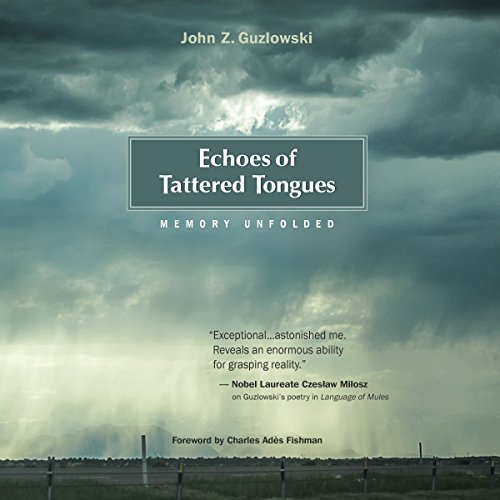 In this major tour de force, John Guzlowski traces the arc of one of the millions of immigrant families of America, in this case survivors of the maelstrom of World War II. Watch the book trailer at www.polww2.com/EchoesTrailer.

Raw, eloquent, nuanced, intimate - Guzlowski illuminates the many faces of war, the toll it takes on innocent civilians, and the ways in which the trauma echoes down through generations.

His narrative structure mirrors the fractured dislocation experienced by war refugees. Through a haunting collage of jagged fragments - poems, prose and prose poems, frozen moments of time, sometimes dreamlike and surreal, other times realistic and graphic - Guzlowski weaves a powerful story with impacts at levels both obvious and subtle. The result is a deeper, more visceral understanding than could have been achieved through descriptive narrative alone.

This is the story of Guzlowski's family: his mother and father, survivors of the war, taken as slave laborers by the Germans; his sister and himself, born soon after the war in displaced persons camps in Germany; the family's first days in America and later their neighbors in America, some dysfunctional and lost, some mean, some caring and kind; and the relationships between and among them all.

As Guzlowski unfolds the story backward through time, he seduces us into taking the journey with him. Along the way the transformative power of the creative process becomes apparent. Guzlowski's writing helps him uncouple from the trauma of the past and at the same time provides a pathway for acceptance and reconciliation with his parents.

Ultimately, then, this is a story of healing.

What listeners say about Echoes of Tattered Tongues: Memory Unfolded

This told a story, then invited the reader in

John Z Guzlowski provides a strong and visual audio script with Echoes of Tattered Tongues. As someone who studied poetry in depth as an undergraduate, I really never expected to hear an audiobook that could pull off poetry in the way this one has. My initial thought, before I even started listening to the book, would be that it would be sad, it would make me sad, and I would want to turn it off. However, there’s a warmth to the words and the poetry in some ways closure, in other ways a visual tour of an era we’ve mostly forgotten. The Publisher’s Weekly review did not do the story justice, rather, it made it seem as though the book lacked humanity, that it was mean to shock by picking those particularly vivid and painful poems.

However, I found that story about the trunk especially moving, and one that I think does a better job as a conduit for the rest of the book. There was a steamer trunk that his father built with his own hands then loaded with those things they would need in the new world. Along with the contents, it began to carry memories of the father who built it and the mother who knitted some of the clothes that went in it. The trunk went to Chicago and served as a table, bench and even a bed. The trunk went from Chicago to Arizona and again it was one of those lasting memories that continued on with them.  For $150, the author could have kept the trunk and the memories that came with it, instead it went on with the estate sale and an irreplaceable part of the family’s history was lost. The story doesn’t end there as he muses about the reasons for turning down the opportunity to keep something that had lasted so long. His not taking on the trunk felt callous and as good poetry and prose does, evoked an emotion, he was honest about it, talking about the doubt later and that I felt was the best summary of the book.

So many books abruptly tell a story, then make a point. This book told a story, then invited the reader to come into the story and go along the decision making process with him. The descriptions of the events were vivid, the story honestly told, and the reflection clearly and sometimes coldly or warmly related. Nonetheless, it is one of the rare instances where I feel the poetry was the right medium. Few people properly use flashes in history to tell a story, most of the times the reader will become lost. In this story, the reader finds his own humanity and his own unanswered questions a parallel to John Z. Guzlowski’s recounting.

John Bandi provides a thoughtful, reflective baritone that accompanies well the gray cloud cover on the cover image. He clearly delineates those areas that deserve remembrance and those that moments that uplift. Ultimately, his introspective tone, thoughtful and fluid, provide the right accompaniment to an audio delivery of visually startling events.

Details of the Long Reach of the Nazi Concentration Camps

This book is a well-told story of the darkness and long-term impact of the Nazi movement and thei concentration camps. The author reveals how the damage impacts a family for generations. Jon Brandi's strong but calming voice pulled me through the darkness. I hope he does more narration work.