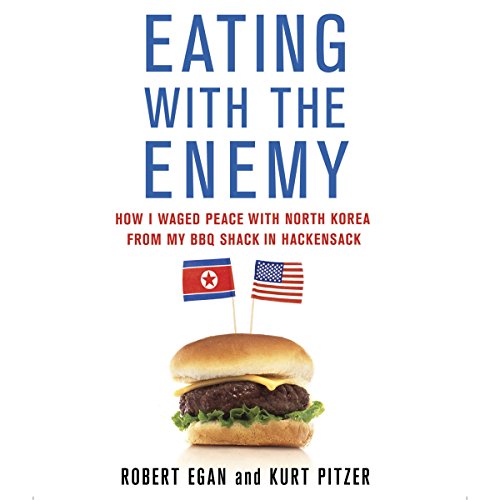 Eating with the Enemy

How I Waged Peace with North Korea from My BBQ Shack in Hackensack
By: Robert Egan, Kurt Pitzer
Narrated by: Traber Burns
Length: 12 hrs and 36 mins
Categories: Bios & Memoirs, Personal Memoirs
4.5 out of 5 stars 4.5 (36 ratings)

Eating with the Enemy

Robert Egan could have been a roofing contractor, like his father. Instead, he opened a barbecue restaurant. His interest in the search for Vietnam-era POWs led to an introduction to North Korean officials desperate to improve relations with the United States. So Egan turned his restaurant into Camp David, with pork ribs.

During tumultuous years that saw the death of Kim Il Sung, the rise of Kim Jong Il, the Bush “Axis of Evil”, and North Korea’s successful test of a nuclear weapon, Egan advised North Korea’s deputy ambassador to the United Nations, informed for the FBI, vexed the White House, and nearly rescued a captured U.S. Navy vessel. Based on true events, this fast-paced tale shows how far one citizen can go in working for peace.

“An enlightening, and precarious, experiment in the ways opposing cultures can merge and acquiesce.” ( Kirkus Reviews)
“A jaunty narrative of one man’s sometimes self-indulgent escapades in the face of government ambivalence.” ( The New York Times)
“In this engaging, off-the-wall memoir, Egan . . . demonstrates the power that individual friendships formed across ‘enemy’ lines can have.” ( Library Journal)

Very well read with a beautiful message: anyone from anywhere can make a difference. I loved Bobby’s attitude throughout the book, and the end was extremely touching. It’s now one of my bucket list items to visit Cubby’s before I die.

One in a million book

This perspective on the US government and the Northern Korean way of thinking is unique to say the least. I enjoyed the story and appreciated the empathy. I will be a Cubbies fan for life!!

Great story and narrator. Kept me wanting to listen for more. Also made me see some diplomatic issues as a North Korean would.