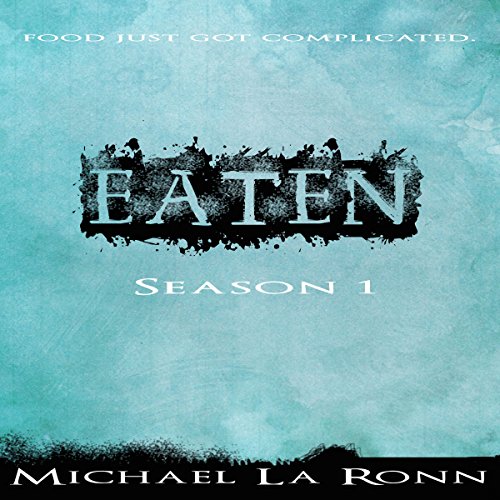 An empire of processed foods on the verge of world domination. A broccoli terrorist with nothing to lose.

New Eaton is a futuristic metropolis where obese humans live lavishly among processed foods. Vegetables are second-class citizens, used for sinister experiments that keep the city alive. A trio of salt, sugar, and fat called the Triumvirate rule with brute force to keep the vegetables in submission.

Brocc is a broccoli with a mysterious past who wants to take down the Triumvirate, even if it means sacrificing himself. He and his terrorist group, the Vegans, launch a devastating attack that throws the city into chaos.

But when things go wrong, Brocc takes an innocent human hostage in order to save himself, creating a power struggle with the Triumvirate that will change the fate of all food forever.

This is the first book in the sci-fi fantasy saga, Eaten, by Michael La Ronn. It's a wholesome blend fantasy, action/adventure, and cyberpunk, with humor added for taste.

Clever way of bringing the food war to life!

If you could sum up Eaten: The Complete First Season in three words, what would they be?

I liked how well the author was able to use food to build every inch of the world and it made perfect sense. Even the simple saying like "Hasta La Vista" became "Hasta La Pasta". I also liked that even though it's a fantasy, you could totally imagine that this is what's happening in the real world, with the way people are becoming more and more loyal to processed foods than vegetables and fruit.

Would you listen to another book narrated by Anthony Bianco?

I believe so. He was decent enough. He had decent pacing and variety.

One sitting would have been a bit much but probably I could have listened within two or three sittings. It was a fairly short book, about five hours.

The elaborate world the author built was quite imaginative and creative. It's worth reading if you're into books that immerse you deep into the fantasy.

This book was so much fun to listen to, especially for anyone that grew up in the early 90s.

The story will hit you from left field each time you think you know what is about to happen. There are dozens of little homages and throwbacks, but they don't get in the way of the story.

What does Anthony Bianco bring to the story that you wouldn’t experience if you just read the book?

The narrator has a ton of different voices that just add to the already awesome and diverse cast.

I can't even begin to count the number of times I just burst out laughing while listening to this book.