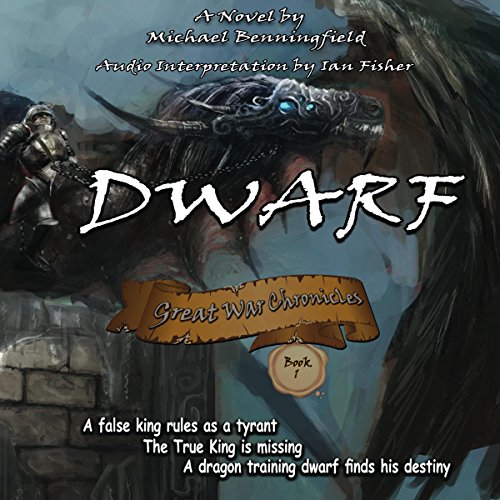 By: Michael G Benningfield
Narrated by: Ian Fisher
Try for $0.00

When a dwarf with no claim to the throne manages to overthrow the kingdom and take over, an unlikely hero steps forward and challenges his rule to the throne. Will the hero succeed - or will his defiance lead to the entire kingdom's downfall as ogres, giants, dragons, spell casters, and more converge against the kingdom and start one of the greatest wars in all of times existence?

What listeners say about Dwarf

very good book, narrator was good. dwarfs are the main focus. the world is very interesting. give this book a try

A world we've been waiting to see

There is a trap that fantasy writers often fall into; a classical affectation that comes across grandiose. The style sounds brilliant coming from Ian Fisher, who does a wonderful job in Dwarf: Great War Chronicles, Book 1, but it often stands in the way of genuine character building.

The world of the fantasy dwarf is one we have needed for some time. Too often the sidekick, Benningfield casts his entire world with dwarves. He builds an incredibly detailed world of dragon-riders, dwarven made traps, and battles between kings. With a cast filled with nobles, it places another barrier between the reader (listener). I had a hard time connecting with the characters. That is always difficult in a fantasy book, especially with the use of thick, tongue-twisting fantasy names.

Ian Fisher was brilliant. He was able to own the thick language and welcome me into the world.

Was Dwarf worth the listening time?

There was a great deal of fun, and once I was able to sort out which dwarf was which, I enjoyed the world a great deal. Benningfield has created a huge world that is a blast envisioning.

I like books that has action, I hate when an author spends two pages explaining what a character is feeling emotionally. One of the reasons I enjoyed this book was that the action flowed. I don't like too many plot stories going on at the sane time, having to read/listen for 5 mins to get the gist of that particular plot again only for it to change to another plot. Yet another reason I enjoyed dwarf, enough plots to make an interesting story but not so many as to forget. I'm more of a reader than a listener, when you nod off your thumb is usually stuck in the page, but when you are listening it takes a little longer to find where you left off. I had the opportunity to listen to this book so gave it a go.
The narrator really put a lot of feeling into the characters making them feel believable, though, the tyrant kings Geordie accent and infliction didn't quite work for me. I couldn't picture him saying those things.
I am very glad I discovered this series of books, I will be buying the others as they are released though for my kindle rather than than audible but that's just my personal preference.

I am looking forward to catching up with this world again.