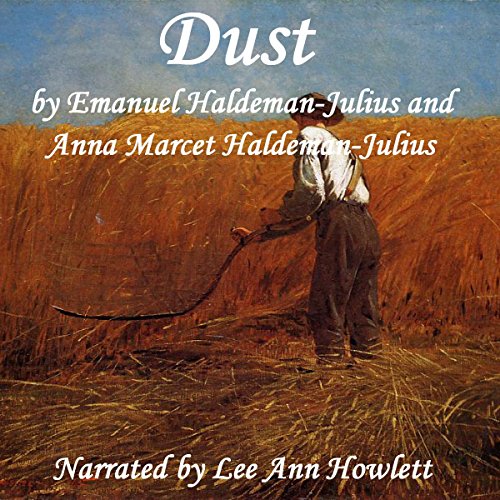 In the 1870’s, Jacob and Sarah Wade travel with their three children in a covered wagon to lay claim to land in Kansas to call their own and scratch out a living. The book follows three generations of the Wade family although it concentrates mostly on the relationship between Martin Wade, the oldest son of Jacob and Sarah, and the woman he chooses to marry, Rose. The hard existence of farm life takes a toll on all involved and affects each person differently. This novel was a best seller when it was published in 1921 by the husband and wife writing team of Emanuel Haldeman-Julius and Anna Marcet Haldeman-Julius. It was considered an example of the new writing of naturalism and realism being published at the time. “Painfully gloomy as it is,” the New York Times noted, “Dust must be classed among the 'big' novels of the year.”

If you could sum up Dust in three words, what would they be?

A very good historical story. The narrator did a good job reading this audiobook. It kept me entertain during my long drive.

The opening line did it again. Knowing what this story was about and hearing the title of the first chapter “The Dust is Stirred” was intriguing to me as it takes place on the Kansas Prairie where the tallgrass grows.

Three generations survive and thrive on their farm through the ages. This story was somewhat of a surprise with an unexpected twist of fate with Martin and Rose. I would like to think that the earlier pioneers would have been in more of a state of content than the story portrays, although I know times were hard. The story was somewhat sad but worth a listen.

My curiosity lead me to look up the authors of this book and I found their story to be really neat as well. I found them listed in the Kansas Historical Society.

About the narrator: Lee Ann Howlett told this story the way it was meant to be. The times were hard and people were haggard and worn. She portrayed this perfectly. She added the element that portrayed the lives of the early pioneers as they moved west. Great work!

Audiobook gifted in exchange for review

What does Lee Ann Howlett bring to the story that you wouldn’t experience if you just read the book?

Lee Ann Howlett's smooth narration, with an edge of the sardonic, perfectly matches the tone of the story and allows the listener to feel the pain and loneliness of the characters.

Dust is an overlooked classic that, while published in 1921, remains relevant to the 21st century reader. The essence of the relationship between the main characters, Rose and Martin, is not unlike that of modern couples who seek to fill the emptiness in their relationships by working harder. A melancholy tale, indeed, but this is a story that needs to be told to remind us of our humanity.