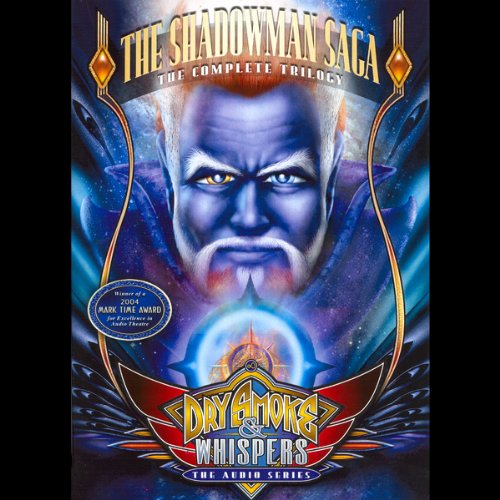 Here's an otherworldly science-fiction adventure from Transdimensional Media. Combining the humor and imagination of Ruby, with the pacing of Firesign Theatre, and an imagined world all its own, Dry Smoke and Whispers is a techno-noir drama with a sense of humor, and a memorable cast of characters. Emile Song, an eccentric, intelligent, and telepathic detective is given the task of catching the East End Reaper, a techno-fiend terrorizing the people of Quaymet.

These are dark times in Quaymet, brought on by the discovery of light - namely, a new power source, Solarium. But where do the elements of this boon to civilization come from? And who's directing how it's sold and used? Emile meets the ally - or is it enemy? - of a lifetime, a Man of Power who killed Song's father and now seems intent on killing him. Soon, Song and Henchard are drawn into a battle even they may not survive, as they go up against an empire that's being consumed by an ancient evil.

these productions either grab you right off the bat or leave you wondering, "What the .....?" I love them. Strange, surreal and fun! well-acted, nice sound fx.

First point, the reason for the long running time is that this version contains the two sequels Murder on the Huddleston Ferry and Allies of the Overseers so there is no need to get them separately.

The quality of this production is top notch, with a good balance of thrills and tongue in cheek humour.
Story wise, it's very addictive. Really pulls you in to his intergalactic/dimensional struggles.
Acting wise it's superb, all the actors take to their roles with gleeful abandon of any seriousness which really helps bring it to life.
All in all, I flipping love it!