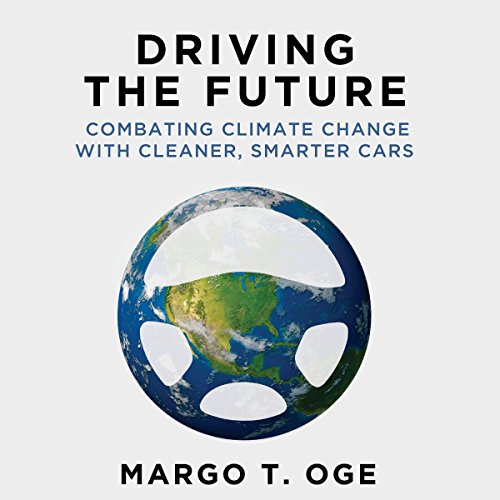 A distinguished expert offers a dazzling preview of the cars of the future while exploring the science and politics behind climate change.

As the director of the EPA's Office of Transportation and Air Quality, engineer Margo Oge was the chief architect behind the Obama administration's landmark 2012 deal with automakers in the US market to double the fuel efficiency of their fleets to 54.5 mpg and cut greenhouse gas emissions in half by 2025. This was America's first formal climate action using regulation to reduce emissions through innovation in car design. Tom Friedman praised the new rules as the "Big Deal" that redeemed the administration's previous inaction.

In Driving the Future Oge portrays a future where clean, intelligent vehicles with lighter frames and alternative power trains will produce zero emissions and run at 100+ mpg. With electronic architectures more like that of airplanes, cars will be smarter and safer, will park themselves, and will network with other vehicles on the road to drive themselves.

Offering an insider account of the partnership between Federal agencies, California, environmental groups, and car manufacturers that led to the historic deal, she discusses the science of climate change, the politics of addressing it, and the lessons learned for policymakers. She also takes the listener through the convergence of macro trends that will drive this innovation over the next 40 years and be every bit as transformative as those wrought by Karl Benz and Henry Ford.

What listeners say about Driving the Future

Margo Oge talks too much about herself. She's not the story. She rambles on about the history of climate change telling the same things twice on occasion. She keeps describing herself as caring about global warming but she did very little during the Bush administration. Now she works for VW and defends its indefensible actions. Unfortunately, this is probably the best book for learning about vehicular climate change. Otherwise it's not worth reading. The reader ends too many sentences with question marks. She could be a lot better.

One of the best books on environmental regulations by an insider. a must read book.

This book gives a complete picture on the past and present development in automobile technologies, implications for regulations, industry and environmentalists. The author conveys great leadership. Something I felt missing on her discussion is how the developments she mentíos Interact with other non car modes of transportation such as buses, which are also electric. She seems to focus too much on cars and there are already technologies that are cleaner than the car: bikes for example.