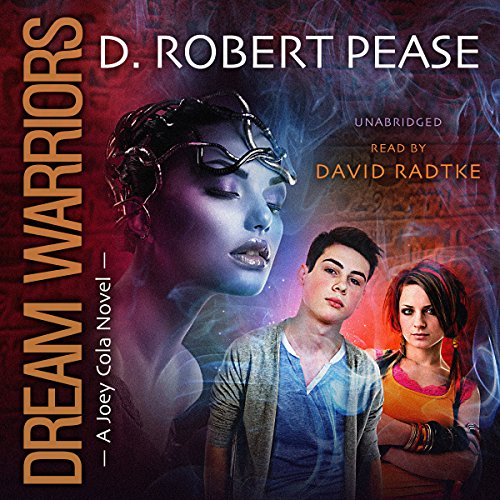 Joseph Colafranceschi is a 15-year-old, self-described geek, living in the Bronx. The second youngest of 12 sons of the former U.S. ambassador to Italy, Joey discovers that a small Egyptian statuette, given to him by his father, endows him with power to control his dreams.

After his brothers throw him down a manhole, Joey is drawn into a hidden society of warriors who have been battling a reincarnated Egyptian Pharaoh for over 3,000 years. In the dream world, everyone is not what they appear to be, and it's impossible to tell who to trust. As Joey slips deeper into a world of gladiator battles and clandestine missions within other people's dreams, he catches the eye of a beautiful Egyptian princess.

The only thing that keeps him grounded in reality is his best friend Alex, but even she may not be who he thought she was.

What listeners say about Dream Warriors

Quite interesting. It touches on a couple of genres, such as fantasy/magic, superheroes & medieval/gladiators. Definitely a read for young adults & the boys will certainly enjoy it.

Joey was a true teenager mess with all the struggles a teen faces… crazy family dynamics, finding himself & discovering that first sweet puppy love.

Intriguing world and well done world building. I read via Audible & the narrator was perfect. Excellent twist at the end & conclusion.

My star ratings include these 5 elements:
1★ story line
1★ engaging characters
1★ use of world building/descriptive
1★ being well edited or narrated
1★ the ending

Creative Fun for Teens and Adults!

Where does Dream Warriors rank among all the audiobooks you’ve listened to so far?

I've only listened to about a dozen audiobooks so far, but this is easily one of my favorites.

The titular character, Joey Cola, sounds like a recipe for unrelatability. He's exceptionally intelligent, the son of a wealthy diplomat and part of a huge family with its own quirky cast of characters. But beyond that, he's very much your average kid, vulnerable and frustrated with his own limitations. While what he is makes for an interesting story, it's who he is that keeps us hooked.
I also liked that the story has a number of strong female characters: Joey's mother, his friend Alex, and the mysterious Cleopatra. Although the main character is male, I feel like this book would appeal to teenage boys and girls alike.

David is a versitile narrator, and his youthful voice is perfect for young protagonists, and young adult literature in general. He is able to portray a full cast of various ages, genders, and ethnicities with clarity and without confusion . He is very mindful of the author's descriptions, and his voices enhance those descriptions, as well as the listener's experience. I've listened to several other works he's narrated, and this is some of his best work.

Saving the world? They can do that in their sleep.

If you have teenagers and a long car ride, get this book! After all, who hasn't been fascinated by the power of dreams? Who hasn't wanted to control what happens in a dream, or better yet, make their dreams a reality?