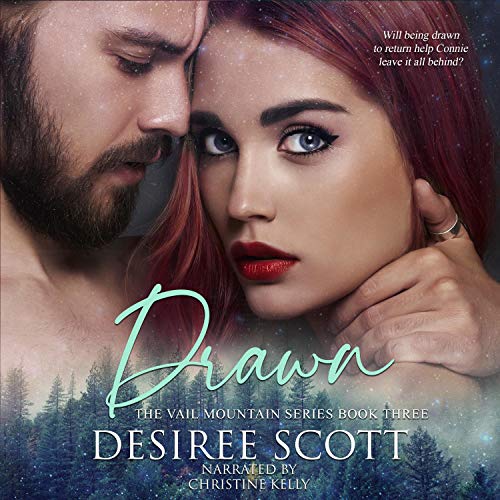 By: Desiree Scott
Narrated by: Christine Kelly
Try for $0.00

Her dreams shattered, Connie Meyer just wants to be left alone to live her life in peace. She finds that difficult to do when her estranged husband’s mother insists she return to her son and a marriage she no longer wants - a marriage that does more harm than good.

Desperate to escape, Connie returns to Vail Mountain, the one place she had truly felt alive. However, her troubles soon follow her, and she gets more than she bargained for as she fights not only her past but the intense feelings that one newly elected sheriff arouses in her.

Jacob Tanner is weary of the city life and the never-ending stream of criminals that plague New York City. He resigns from the police force after a drug bust goes wrong, landing himself in the hospital to face his mortality alone. Uncertain about the direction of his life, he learns of the new sheriff position on Vail Mountain and takes a gigantic leap of faith - faith that he isn’t making a big mistake. Armed with nothing but a few possessions, Jacob relocates, only to find himself falling hard for a woman whose blue eyes speak of pain and loneliness.

As he battles his worst nightmare, can Jacob show her there is more to life than what they have been dealt and convince her that with him, nothing is impossible?

What listeners say about Drawn

Not for me! Disappointing!

My opinion - not meant to be rude but honest.

Same format as last book, using some of the same plot liners at times.
Lots of cussing!
Didn't add to authenticity of story at all.
It did not flow well. Stilted storyline. Disjointed and just fell flat.
I wanted to like it, but well I only listened to hear the 3 of 3 series.
It was very disappointing.
Another rushed plot, getting characters to fall in love with danger...

Just didn't work for me.
My opinion is you could really skip the whole series.

My opinion, not meant to be mean but honest.

Now the narrator - absolutely awful again for all 3 books. ugh!

Maybe if I read this book instead but gosh, the plot had good possibilities, but as with all 3 books rushing to get every storyline to mesh together and again -

Just didn't work for me.

I know it's fiction and all the actions can happen with a snap! It the authors work after all.
I hope you feel differently and do enjoy this series.
Just not for me!

This is the third book, and the last book in the Vail Mountain Trilogy. This is a great series of short novellas! Connie and Jacob's story is suspenseful, fast-paced, and sweet. I loved to see again the other characters from the previous books in the Series. I love the ending. The narration was well done. I received this free review copy audiobook at my request and I have voluntarily left this review.

I got this story via audiobook boom and this is my voluntary review. I did not read the first two books but was able to follow the story. This was a very good story. I really liked the way the story was set up. I also liked the way the main characters danced around each other before committing to the experiment. The secondary characters were vital to the story. I loved the way the old sheriff retired. Too funny. The narrator brought the story to life. This is a must-read.

Drawn to Vail Mountain, which is book 3 in the Vail Mountain trilogy by Desiree L. Scott was a decent story, clocking in at about two and a half hours long. Connie and Jacob, a recently retired police officer in New York who is considering taking over the Sheriff's position in Vail Mountain reconnect after years. Connie is running away from a crappy situation-a husband who refuses to give her a divorce and just needs to get away and have a fresh start. Connie and Jacob were likable characters, though Connie's ex-husband and his mother were annoying as can be. The story was put together pretty well for this being a shorter novella. Now, I'm not one to be bothered a bit by swearing in books that I read/listen to. I don't love the use of unnecessary foul language though. It just seemed that the swear words were thrown into the story just to have them there. It felt forced. There was no need for SO much swearing in this case.

Christine Kelly did decent job narrating the story. Yes, I know I'm using the word decent a lot in this review. Is the book or the narration crazy outstanding? No. Is it a decent listen if you go into it not expecting it to blow your socks off? Absolutely. The narration was fairly flat, but I didn't find Ms. Kelly's voice to be irritating or take away from the story at all like some others did. I was voluntarily provided this free review copy audiobook by the author, narrator, or publisher for an honest review.

This book keeps you engaged from the beginning. It's more of a novella but just as enjoyable as a lengthy book. Connie has been trying to divorce her husband for months but he refuses to sign the divorce papers! Her mother-in-law is a bully and keeps hounding her to return home. Connie has had it with the duo and decides to visit her friends at the Vail Mountain Resort.
Jake has resigned from his position as a detective with NYC police and is moving to Vail Mountain to be close to the only ppl he considers family. Incidentally, the sheriff's position for Vail Mountain is opening up and Jake's decided to apply. Will Jake and Connie rekindle the spark between them that's been sizzling since they were at the resort last year? Or will Connie's husband and MIL succeed in getting rid of her?
Fast paced, with lots of action and good narration. Sorry to see the end of this series.

Christine reads/speaks way too fast. It’s difficult to follow the story. There was also no attempt to change character voices. She just flew through the story at high speed which belittles the whole story.
Suggestions:
1. Slow down
2. Make some effort at character voices
3. Read the story as a real story with characters

Her dreams shattered, Connie Meyer just wants to be left alone to live her life in peace.
good book needs a different narrator sorry to say