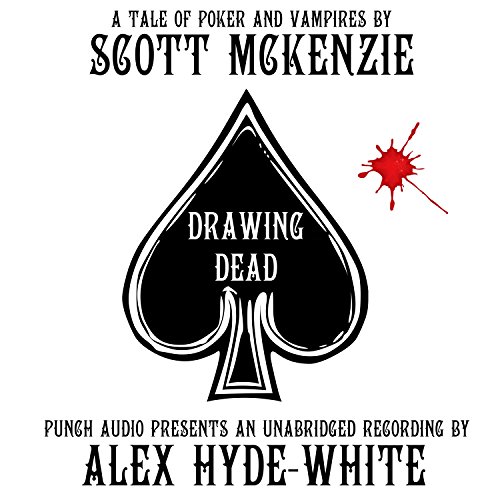 By: Scott Mckenzie
Narrated by: Alex Hyde-White
Try for $0.00

Eddie Nelson is a professional poker player, testing his skills in Las Vegas at the World Series of Poker for the first time. Unfortunately, he's on the worst run of his life and can't afford his buy-in to the Main Event. Then he meets a shadowy figure called Raphael who offers to back him for a 50/50 split of any winnings. But if he loses, he has to play in a private tournament of Raphael's choosing. . .

Drawing Dead is a tale of poker and vampires by Scott McKenzie, author of One Day in Gitmo Nation, Death by Autopen and Rebirth.

What listeners say about Drawing Dead

Vampires and poker - a deadly combination

This story is a good example of the classic make a deal with the devil theme. It was well written, well performed and entertaining,

Mr. Alex Hyde-White knows how to keep a listening audiences interest. With his many voices and suspenseful in tune characters, he makes your audio book listening experience top notch.

Eddie Nelson has an online gambling addiction that will bring him to the ultimate poker game. If you like poker, and you like a different sort of twist on the vampire story, then you will enjoy this listen. This is the underground world of gambling, where not everyone will walk away alive. "Drawing Dead," the perfect title.

What made the experience of listening to Drawing Dead the most enjoyable?

What other book might you compare Drawing Dead to and why?

I'm going to skip this question for now. Nothing is coming immediately to mind.

Which character – as performed by Alex Hyde-White – was your favorite?

The story is told using a few flashbacks to bring the reader up to date on how Eddie Nelson got to this deplorable state. A Brit, he and his girlfriend came to Las Vegas for a vacation. He returned home to nurse his blossoming addiction for on-line poker. That on-line addiction grew to playing in live tournaments. Soon, he was playing professionally, and living by himself. Fast forward to present day and Eddie has been on a losing streak for weeks now. He’s out of money, considering who he can call to wrangle a plane ticket home when a sketchy stranger buys him a beer. Raphael wants to stake him in a high-stakes game. If Eddie wins, he gives half his winnings to Raphael. If he loses, then Eddie has to do Raphael a favor and play in a private poker tournament.

This tale started off a little slow for me and I think that is because I don’t play poker and some of the lingo was lost on me. There was a quick run down of game rules and terms at the beginning of the book, but such a list is hard to absorb in audio form. Anyway, the story does pick up with the flashbacks of Eddie spiraling into the poker addiction whirlpool. I really enjoyed watching Eddie go from a winning high to another high to another high and then the bum of a loss, and then another loss, and finally to the point where Raphael finds him.

And I guess I am free to talk about the Las Vegas vampire aspect since there is line about these poker vampires in the book’s description. The vampires don’t show up until about half way through the book. Mckenzie has created this whole underworld society in Vegas for these vampires. Even the taxi drivers know about them; or know enough to not ask questions. This part of the book was the true story, and the gem of the tale. It was for more interesting, suspenseful, and messy. Not everyone makes it out alive.

For much of the book, there are no females. Sure, Eddie had a girlfriend that had one or two lines at one point, but she didn’t play a real role in the story. There is an epilogue to the tale told from a woman’s stand point. It is done well, so one can see that the author is very capable of writing female characters. But it would have been nice to make some of the other players, a dealer, or even a few of the vampires female. We make up 50% of the population (even more as a generation ages because men just don’t last like us ladies) so why not have them make up 25% or more of the characters in a book? But that is my only complaint.

The Narration: The narration started off a bit rough, like I could hear background noises. This was when the basics of poker were being introduced. But once the story started proper, the narration became excellent. So I wonder if that part at the beginning was tacked on as an after thought? Anyway, Hyde-White did a great job with Eddie’s voice, the few accents, and keeping each character distinct. He even had to make a few creepy vampire noises which were done well.

The story starts off a little slow but once its going its an intriguing enough to make it worth a listen. The poker tutorial at the beginning is great for those not familiar with game. The narrator has a good voice and enough variety to keep the story interesting. I would have like to hear more about the vampires once they were revealed: perhaps that'll be in a sequel.

I read this one a few years back and enjoyed it. With an Audible edition somehow in my library, I thought I could stand re-visiting this 90 page novella.

Not usually one for vampires here the story worked for me. I think what I particularly liked most was McKenzie's depiction of how Eddie Nelson fell into full-time gambling. A passing interest, turning into an online obsession - the lost hours, the secret nature developing, the damage to a relationship, the loss of employment - all of them happening but less damaging at the time to Eddie because it's all on the up and up. He's winning, he's making a name for himself and he has ambitions.

Cue Vegas and a continuation of the good times before the inevitable crash and burn and with a new backer and a second chance, though whether it's all for the good is debatable. A second important character gets introduced near the end - a female version of Eddie and the cycle begins to repeat.

There's a lot of tension on display as Eddie navigates his high-stakes poker games. I got the gist of most of the action but some of the rules regarding Texas Holdem kind of eluded me and TBH I've zero interest in digging in to find out more. I kind of think I'd rather undergo root canal surgery without anaesthetic that take a trip to Las Vegas and the gaudy strip and casinos. But hey that's just me.

I quite liked the narration, though maybe the Manc accent wasn't quite nailed on.

A bit off the usual track as far as my reading tastes are concerned, but an enjoyable 90 page excursion to Vegas in the company of an aspiring poker professional.

I do like books that delve into the mindset of the gambler, whether it’s the suave, ice-in-the-blood professional with the stony countenance, or the sweaty, fidgety, small stakes hustler whose life flashes before him as he desperately awaits the turn of the final card, bringing either temporary salvation or ruin.

I’m less fond of vampires myself, but it was an interesting tale, well told and it kept my attention. Great setting with the bright lights and strip well described, as well as the seedier side away from the glamour of the big casinos. I got a feel for Eddie’s hopes and dreams and fortunes which rose and fell on the turn of the cards. Our poker games were explained and strategized as the hands unfolded, with McKenzie ratcheting up the tension as the games climaxed. This was done without ever feeling as if I was reading a “how-to” guide.

The ending was slightly telegraphed and a bit predictable, but overall a decent way to pass a couple of hours. I usually ask myself after finishing something whether I’d want to read more by the author in future. On this occasion – it’s a yes, but probably on the proviso that the vampires stay in the closet next time around and the tale has all its roots firmly in the real world.

I accessed this one when it was a freebie over on Smashwords either late last year or earlier this.

Poker to die for

Good story for a long drive. I've listened a few times already . Worth every penny.