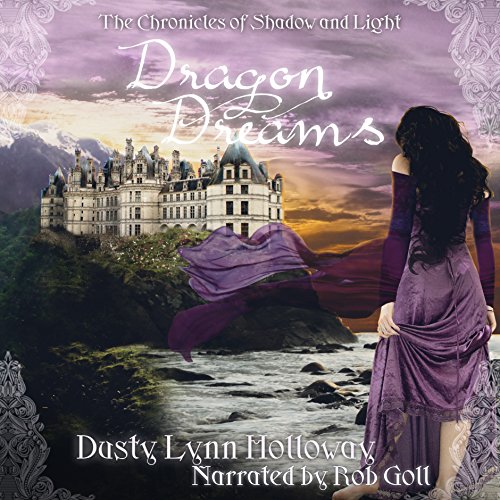 By: Dusty Lynn Holloway
Narrated by: Rob Goll
Try for $0.00

A prophecy of murder.

An elf hunted by dragons.

One man who risks everything to save her.

Nachal is a human that should not be having prophetic Dragon Dreams. But he does. Every night he dreams of an elf running through flames, trying in vain to outrun the Rebel Dragon Obsidian. Every night he sees her fall. Sees her eyes close. Feels her heart as it slows, and then stops. Every night, through the connection of the dream, he dies with her. It's a spiral that he can't control, and it's slowly driving him insane.

Auri is an elf raised by a powerful human king not of her own blood. Left behind by the mother who perished far from the elven isle El'dell, she seeks to forge her life among the humans. Her journey takes her to the land of her heritage. To a place that holds both a haunting betrayal, and a miracle that just might save her life.

Together, they become embroiled in a conspiracy where destinies are intertwined, love is born in the fallout of ultimate sacrifice, and the only path to victory lies through the searing flames of dragon fire.

What listeners say about Dragon Dreams

Dragons, Elves and Humans all in this action packed fantasy adventure. This is the first book in this series. From the first page to the last, you are swept away to another world and you are glued to the book until the end. The writing of this story is detailed and the world comes to life before our eyes. You can feel what the characters feel. No matter what they go through, you can feel each emotion, struggle, battle, love and pain they all feel. The development of this world keeps you entertained and you won't want to put this book down. Can't wait to see what comes next in this series.

What made the experience of listening to Dragon Dreams the most enjoyable?

Dusty’s eloquent descriptions and the way Rob read them. I also loved the banter between the characters.

What other book might you compare Dragon Dreams to and why?

Hmm. I guess I would say a bit Lord of Rings, but with more romance like Twilight.

I loved, loved, loved how he did the dwarf’s voice and the dragon. Totally my favorite characters. I was smiling as I listened, and laughing at the jokes.

This made me eager to listen to book 2! Which I will listen to for sure!

Story jumps around between 2 different stories

Would you listen to Dragon Dreams again? Why?

No, this story was kinda dry and it jumps around between 2 stories to finally merge into one at the end. I don't even like watching movies that have more than 1 plot going at a time.

The narrator made the story bearable.

What does Rob Goll bring to the story that you wouldn’t experience if you just read the book?

He's great with bringing the right kind of inflection into his voice to allow for that specific scene.

The story is a bit confusing at times. I had to listen to a few parts again to understand what was going on. There is not much romance in the story. An unusual love triangle develops. I have several questions that were left unanswered.

The narrator did a fairly good job bringing the story to life. It is always tough for a male to portray female voices.

The world created was unique. This is an interesting fantasy tale with a few twists. If you enjoy Fantasy/Adventure you might want to give this story a try..

A Fun and Magical Tale

If you could sum up Dragon Dreams in three words, what would they be?

I don't read many fantasy books but I enjoyed listening to this tale. The characters of the sea dragon Drashmere and Wolf were the most interesting to me, as well as Liran the elf. I would have liked to hear more of Drashmere and his history, especially.

Rob is an excellent narrator and I really enjoyed all of the creative and versatile characters' voices he created. His ancient dragons, dwarves, elves, and humans all sounded like very different, distinct individuals and I even noticed some different regional accents, such as the dwarf's! All of those traits made listening to the story fun. Rob also portrayed the emotions of the characters well in his voice, which made them all the more convincing.

I will probably give more fantasy books a try! I would have liked further explanations of just a few points in the book (without creating spoilers here) like some vague details about the reasons for certain conflicts, why or how certain magical elements worked, or how characters have special knowledge of other characters. Some of these aspects could have been developed a little more more within the story, but overall it was fun to listen to.

Yes, I would recommend this audiobook to a friend.
Dragon Dreams is the first in the Chronicles of Shadow and light, Dusty Lynn Holloway has an incredible imagination, and I think this book let her go wild with it. The audio version really did an amazing job bringing this book and all of her ideas to life.

What was one of the most memorable moments of Dragon Dreams?

Chapter 8: The gates of Bremgar.

Which character – as performed by Rob Goll – was your favorite?

Yes. Definitively, a book you want to listen to all in one sitting.

The narrator, Rob Goll can do a wonderful range of voices. You can tell he had a good time reading the book too though, because his narration is animated, full of emotions and he does amazing sound effects, making the listening experience most memorable.

Dragon Dreams is an engaging romantic fantasy that has it all - action, suspense and humor. It is a good vs evil fantasy with likable and relatable characters that keeps you captivated from beginning to end. Rob Goll did a good job as narrator with easy to understand and distinguishable character voices. This is a must read/listen for fantasy fans. I look forward to more in this series and form this Author. I was given this free review copy audiobook at my request and have voluntarily left this review

the story was good and the narrator spoke well. I'll be listening to the next in the series.

What did you love best about Dragon Dreams?

I enjoyed the scenes with Nachal trying to make sense of his Dragon Dreams.

I found the book to be entertaining. I loved the detail and descriptions of the new world. It created a space you could believe in as the story unfolds

Murder….. always a good binding force in mystery. Dragon Dreams is a two world story that weaves between the worlds of Dragons, elves and magic and the human world. Told as two intertwined stories there can be some confusion in the beginning. As the story progresses the two parts become easier to understand as they make a whole story. The emotions and struggles keep you wondering what comes next.

Overall it is well written and builds a wonderful world with enchanting descriptions. Dragon Dreams sets a well built stage for a series. I look forward to seeing what comes next, but do hope the writer pays closer attention to the joins between the separate stories if she chooses to continue in this style.

I loved Rob Gall's narration. He gave great voice to the dragon. His voice and narration was a great addition to the book.

A fantastical tale of war and love

Dusty Lynn Holloway has written a very interesting book. It starts at the end with a dream that is a vision of a rather bleak future. To be honest, I felt a little lost initially, not quite understanding what was happening and who it was happening to.

Then the story meanders through an intricate tapestry of complex patterns with a lyrical flavour. This is a world filled with dwarves, elves, humans, a wolf and dragons in a war between light and darkness. It is filled with love, sacrifice, decisions with deepseated ramifications and much more. As the threads become clearer, the plot picks up momentum, builds and thickens.

It is hard not to be fascinate as a wonderful and terrible world is brought to life. The relationship between the characters are intrinsically tied together in past and present with coincidences that certainly don't feel coincidental. The plot has tremendous potential and I look forward to the next book.

Rob Goll has narrated the story in a way that matches the temperament of the book. He has brought the characters and circumstances to life making the journey enjoyable.

To the man who soothes my soul

Beautifully read, calming yet engaging. My night time treat - that helps me sleep. Thank you Rob