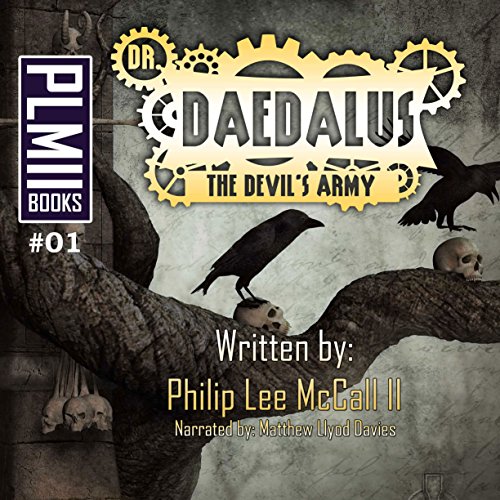 London 1888, Jack the Ripper is on the loose terrorizing the citizens of Whitechapel. The Queen of England sends a mysterious agent to uncover the truth of the vile monster hunting England's streets. The trail of blood leads to an even bigger mystery and to a darker enemy of the Crown itself. While on Mont Orgueil, Grace Flynn, a prisoner of both England and France, awaits her execution for a very long list of crimes. She is considered a danger to society and even the Holy See has proclaimed her an evil most foul. Her executioners proclaim her life of misdeeds and escapades has drawn to a close. Until a living myth named Dr. Daedalus arrives with an unorthodox offer of freedom. Grace's redemption will be found through a journey skirting the bowels of Hell itself. She will face nightmares once thought to exist only in legend and superstition. A secret veil that hides things of the supernatural from mortal eyes has been lifted by the hand of the man who hunts them. Yet does he pose a threat to Grace as well... only Dr. Daedalus knows for sure!

What listeners say about Dr. Daedalus, the Devil's Army

I thoroughly enjoyed listening to this production. The story was very fun and reminded me of the types of books I read as a child. It was cool the way characters that were mentioned in harry potter were cameoed In this book. It was very clever, well written, and I look forward to more books by this author.

This could quite easily turn into a very good series. The two main protagonists, Grace and Daedalus, meet in Grace's prison. Then they join together to save the world from great danger and live to fight another day. To tell anymore would need a spoiler alert. I enjoyed the story and the narration and hope there will be more from Daedalus and Grace in the future.