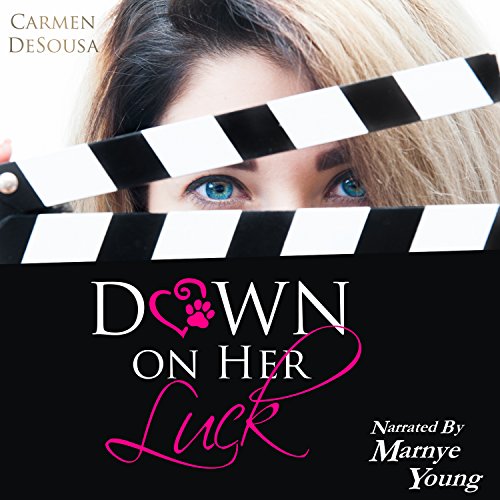 Down on Her Luck: Alaina's Story

By: Carmen DeSousa
Narrated by: Marnye Young
Try for $0.00

Thirty-nine-year-old struggling actress Alaina Ackerman isn't just down on her luck today; lady luck has packed up and left town for heaven only knows where. Instead of ending up homeless on the streets of New York City in November, Alaina accepts her mother's holiday invitation and heads home to Pittsburgh for a much-needed break. Maybe even to give up on acting altogether.

The last thing Alaina expects is to be happy returning home, especially when fate not only tosses an abandoned puppy into her lap, but also practically embeds Markus Klein into her life. That wouldn't be so bad if she hadn't spent the last 20 years trying to forget the night they crossed the "just friends" line. Now, torn between a love she thought she lost, and one she never knew existed, that vicious harpy some call fate dangles Alaina's dream opportunity - a leading role - in front of her. Her only problem...going after her dream could jeopardize her chance at love.

As if a new puppy, love, and career aren't complicated enough, Alaina discovers that her mother and sister are keeping a secret from her. The revelation might be just enough to get Alaina's life heading in the right direction...or send her over the edge.

WARNING: Although there are many adult situations in this contemporary women's fiction with a hint of humor and romance, if say...something crazy happened and a famous producer adapted this novel into a movie, it would have a PG-13 rating. There are no erotic scenes, no graphic violence, and while there are a few allowed-on-TV curse words, there aren't a plethora of gratuitous foul words. Oh, and if you were looking for a cliffhanger, you won't find that here either. While Down on Her Luck is a follow-up story to Some Lucky Woman, it is a stand-alone novel. Please proceed at your own risk.

What listeners say about Down on Her Luck: Alaina's Story