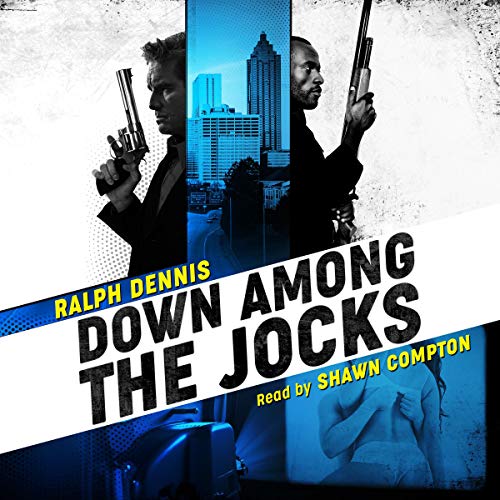 Down Among the Jocks

By: Ralph Dennis
Narrated by: Shawn Compton
Try for $0.00

Before Spenser & Hawk, Elvis Cole & Joe Pike, and Hap & Leonard, there was Jim Hardman & Hump Evans, author Ralph Dennis' legendary 1970s PI team. They're back in the fifth adventure in the beloved and acclaimed series that influenced generations of crime writers.

Retired pro football star Ed Cross did most of his scoring between bed posts with other player's women, including Hump's ex-girlfriend. That was bad enough. But, just to rub it in, Cross sends Hump an x-rated birthday skin flick of him celebrating in bed with two women. Hump goes looking for blood...and finds it. Cross is murdered, and Hump becomes the prime suspect. Hardman works to clear Hump and discovers there's plenty of murderous hate for Cross out there...from the top of the sports world to the pits of Atlanta's illegal gambling scene...and revealing it could get them both killed.

This new edition includes an Afterword from Ben Jones, the Dukes of Hazzard actor and former U.S. Congressman from Georgia.

PRAISE FOR THE HARDMAN NOVELS

"Like Chandler and Hammett before him, Dennis was trying to do something different with what was thought of as throwaway literature.” Joe R. Lansdale, New York Times bestselling author of the Hap & Leonard series

“The Hardman books are by far the best of the men’s action-adventure series.” Mother Jones Magazine

“Among the best series books around.” Philadelphia Daily News

What listeners say about Down Among the Jocks

I've listened to all five of the Hardman series so far. This is not my favorite of the five but it's still Hardman and Hump against the bad guys and that's great no matter how you rank them.

This listen centered on a retired football player and his extracurricular affairs. He got in the crosshairs of some other ex-jocks, including Hump, and stuff happens. (When stuff happens, you want Hardman and Hump in the middle.) This is a pretty straight forward cat and mouse chase with the duo trying to find out who killed the ex-jock.

I found the narration completely enjoyable. Compton is one of my faves and he always makes a listen worth the price! Book six here I come! (There are 13 books in the series. Yes, please.)

I was given a free copy of this audiobook at my own request, and voluntarily leave this review.
Yes, I know this book is older than I am, but I'm listening to it now.
So my review is not based on the time it was written for, but rather based my review on the story itself.
3 Blue Roses
1 Blue Flames

Listening to this felt like watching The Murdoch Mysteries. Pointless, but it kills time.
Narrator Shawn Compton has a beautiful smokey voice and his almost perfect performance could not rescue the boring PI's.

The prologue warns us 100%, this book was written in the 1970's.
Thank you for the warning!
Why didn't you warn us about the danger of falling asleep while walking upright?

These characters are so innocent, they can barely listen to a voice recording of the victim describing his sex life and naming the woman he had.
I know this is how they talked in the 1970's, but there is way too much black this and white that for me to enjoy it. Secondly, we hear about a sex tape, hear about murders and hear about the investigation.

The character development is non existent, no internal struggles, no emotional connections.
If you are into racist, superficial and plain dumb characters with a predictable plot, then you want to listen to this for the sake of research.

How not to write a book in the year 2020.
Happy Listening

This is the fifth book in the Hardman series. It is a standalone book with no cliffhanger ending. All the books in this series are standalones and could be read in any order. However, I highly recommend that you start with the first book in the series - Atlanta Deathwatch. In the first book you get an introduction to the characters and enjoy their growth through the series.

Here, Hump receives an sex film in the mail depicting his former girlfriend with a former pro football player, Ed Cross. When Hump then visits his former girlfriend's home, he finds a bloody mess so he calls Hardman for help. Everyone believes that the former girlfriend has been murdered and as the cops investigate the crime scene, the former girlfriend shows up - very much alive. So who was murdered? Turns out Ed Cross was the victim and he sent similar sex films to several other men recently - so all the recipients [including Hump] are possible suspects. On top of that, Cross was writing a tell-all book [actually recording his thoughts on tape which were then transformed into a book by an actual writer] - so now there might be more suspects who may have wanted to keep Cross quiet. Hump and Hardman have to narrow the field to the actual perpetrator after it becomes clear that the police are very interested in Hump for the murder.

This is another excellent entry in this series. This book was written in the seventies, so be warned, if you are sensitive to these things, the vernacular and belief systems are from that era [for example - words used to describe women and races or attitudes related to domestic violence and race discrimination]. What I love about this series is the cleverly plotted mysteries with main characters who are realistic and flawed. Yet, these are two guys who you would enjoy passing the time listening to their adventures over a beer or two. At the end of the book is an afterword written by Ben Jones, who played Cooter in the 70's TV series Dukes of Hazzard. Jones describes his relationship with the author and some of his memories - it was an interesting heartfelt tribute.

Shawn Compton has narrated all the books in the series. To me, he is absolutely the voice of Hardman and Hump. Another outstanding job!

Hardman book 5. Can be read as a stand alone story but the series is better if read in order.
70's crime fiction but Hardman and Hump are like old friends who are shady and a little dodgy but who's hearts are in the right place.
Hurrah that the publisher is releasing audio versions of this classic series.
Great entertainment, with no graphic violence and just a small amount of bad language, though do accept that the dialogue is of the 70's and is not politically correct.
Highly recommended.
I received a free copy of this audio book at my own request and voluntarily leave this review.

Dennis has done it again; another excellent novel in the series with PI Hardman the ex-cop and partner Hump Evans, ex-football star. Retired Pro football player Ed Cross had quite a reputation as a stud and as a jerk. He thought he was god's gift to women and he liked to rub his prowess in noses of fellow players, and was consequently liked by few. So when Cross mailed a skin flick to Hump, of Cross celebrating with two women in bed, one of which was Hump's ex-girlfriend, Hump was out for blood. Pan to the scene of the ex-girlfriend’s bedroom, blood everywhere, Cross is dead, and Hump has just found him. Hump calls to Hardman in a panic, wondering what to do, and swearing he didn't do it. Hardman tells him to call the cops, report it, and then they set out to prove that Hump wasn't the killer. Little do they know that Hump wasn't the only one to receive a cuckold video and that isn't the only reason Cross was wanted dead. There is no shortage of suspects, no tears for the victim, and the suspects all seem to have alibis. A surprise ending, not neatly tied up, and plenty unanswered questions but a superb story worth full marks on all counts. I was given this free review copy audio book at my request and have voluntarily left this review.

Hatred for the Victim!

I received this audiobook from Brash Books in exchange for an honest review.

Book 5 in the outstanding Hardman series, this one was quite different that the previous four. Here, Hardman’s partner Hump is a suspect in a brutal murder, along with about half a dozen other suspects. The victim was hated by most of Atlanta, and no tears were shed for this man.

The biggest difference with this one is the ending, which was quite sudden and unfulfilling. Bad guys were caught, but the questions and answers were left hanging, and there was no neat, little bow on this story. Still, it was another outstanding entry in the series, and I’m looking forward to reading/hearing the rest of the books.