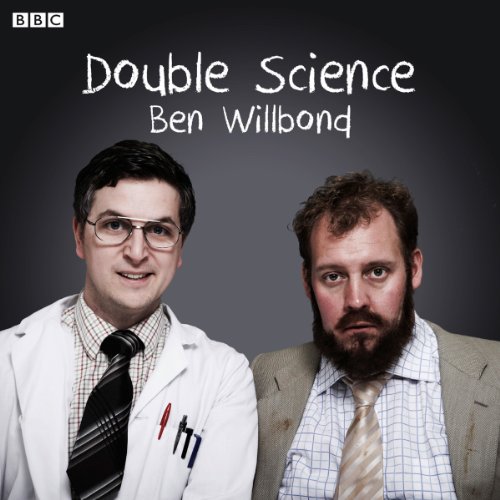 Here are all six episodes of the BBC Radio 4 sitcom written by and starring Ben Willbond and Justin Edwards about two incompetent science teachers who work at a college that specialises in drama, and whose world is turned upside down by the arrival of a new boss.

Forresters Sixth Form College has a highly successful drama department run by the odious Danny Woods. For years, the science department was a forgotten and neglected area where Colin and Kenneth could brew their own ales in peace and quiet. Kenneth even devised a self-assessment system where one class taught itself. Then Dr Oates, the head of department, died from a massive coronary - probably induced by a butter chicken-laden diet. Alison Hatton, his replacement, is keen and wants to bring in new students. Nothing will be the same again.

What listeners say about Double Science

Beyond Boring and Silly

Don't waste your money on this unless you're British. It usually takes a Brit to appreciate British humor no matter how hard you try. Personally, I found it excruciatingly childish and shallow. "Are there really people this ridiculous," we ask ourselves on this side of the pond, or is it just a "style" to entertain? I honestly don't know or care.

Excellent, really daft and very very funny, why no more ?
Let's have it back on the radio. Bye for now . 😆

This is very silly. The two teachers are ridiculously funny. I hope they do more. Better scripts for the women. Such a good original comedy . Thank you for making me shake with laughter.

This is utterly brilliant

This is one of the funniest, cleverest series to hit the Radio 4 6.30 slot, second only to Cabin Pressure. A fabulous cast includes Rebecca Front (the hapless Nichola Murray from The Thick of It) and Justin Edwards ( Blinky Ben from Thick of It and Newsjack anchor). The evolving story follows the attempts by the new female head to transform a fossilised 6th form college Science Department more interested in brewing real ale and consuming curry than doing any teaching, The rivalry for her attention and the war with the head of Drama that unfolds is superb. I return to this again and again because it is just so good and I keep discovering new little nuances with each listen; always a sign of quality. Why on earth the BBC hasn't commissioned a further series is beyond me, instead of the hugely predictable and unfunny Count Arthur, The Castle and Bleak Expectations, to name a few.

Give this a listen, if you like it I would also thoroughly recommend Deep Trouble Series 1 and 2 also co-written by Ben Willbond.

This show's heart is in the right place

As a lecturer in the sciences I know a good few people who wouldn't be able to listen to this without twitching: all the stereotypes, from real ale to social anxiety and cluelessness, have made it into the scripts. This makes it a profoundly daft show. On the other hand, and this is not a small detail, it's even-handedly mean: it isn't the Science Nerds vs the Arty Normals. Nobody is spared in this show - except for some reason the female characters, who tend to the rational. Anyway, this show fulfils the essential requirement for comedy: it made me laugh on a day that wasn't in itself at all funny. Thanks!

How this only got one series is a mystery to me! Will Justin Edwards have to wait as long as Kevin Eldon has for the recognition he deserves? Double Science is very funny and a little bit tragic. It doesn't always work and some elements seem a little familiar but there are many great ideas here and Willbond's character Colin Jackson (no relation) is hilarious.

A microcosm of dysfunctional humans that is wonderfully funny and worth several listens. Be warned you may get a hankering for real ale and curry feasts!

VERY GOOD IN ALL RESPECTS - WHY NO MORE?

The stories made me feel interested and "on the side" of the 2 principal characters.

Which character – as performed by Ben Willbond and Justin Edwards – was your favourite?

I do hope more episodes are recorded.

Doesn't live up to its potential

I'm a huge Radio 4 comedy fan (Old Harry's Game, Cabin Pressure, Bleak Expectations etc) and was pleased to find one I hadn't come across before but my overall impression was a bit 'meh'. It has potential and if it had continued for a second series it might have grown into itself but there were just too many things that irritated or didn't quite hit the mark.

Positives - Rebecca Front as Alison was great and also star pupil and drugs baron Donna. I liked the gradual character development of the leads and there were some good jokes.

Negatives - I found the voices Justin Edwards and Ben Willbond put on as the lead characters incredibly irritating and probably one of the main turn offs. Too many of the characters were just too eccentric, too much of the time. Some of the jokes were quite obvious and cliched, even the otherwise great introduction of 'Beer Tongue' was spoiled a bit by the cheap and lazy Klingon 'your mother has smooth forehead' gag.

What was one of the most memorable moments of Double Science?

Which character – as performed by Ben Willbond and Justin Edwards – was your favourite?

They are both good, but the interplay between them is fabulously funny!

laughing all the way through.

Why no second series? #gutted