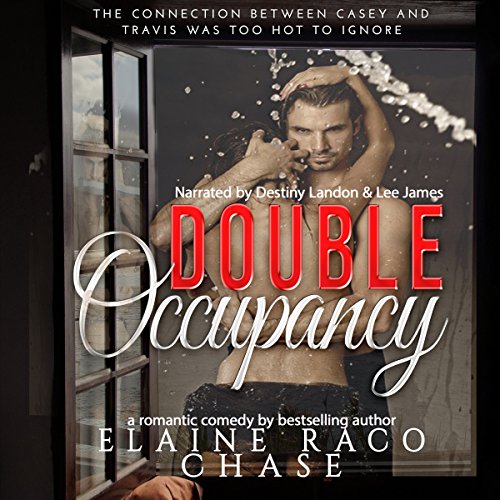 Meet Casey Reynolds - she is NOT thin, petite, clueless, virginal or submissive. Which is exactly why Travis Craig wanted to, "kick down her door and throw her on that bed." Meet the Keurig killer who makes one tough alpha male go down on his knees and a few other positions as well!

All Casey Reynolds wanted was peace and quiet and a long vacation from covering the crime beat in Boston. That's why she agreed to borrowing a villa in Mexico to rest, be alone, and work on her novel.

What listeners say about Double Occupancy

Narration allows the words to breathe

Meet Casey, Pulitzer Prize winning investigative journalist for a well-regarded yet financially strapped Boston weekly. Daughter of a renown sports journalist, the 6’1” beauty is on the edge of a burnout breakdown, her emotional fragility is apparent to all who encounter her. After resigning her long-term position with the paper, the editor / owner, more family than friend, provides her with a villa in Mexico, all expenses paid, as she decides her next move.

Barely a day passes when Casey’s tranquility and isolation are breached by the strappingly handsome intruder, Travis. A friend of her editor’s son, Travis is also in need of a break, and has been offered the same villa for time to regroup as he strategizes for the next takeover.

Sparks fly, initially ignited from annoyance at intrusions into personal time and space, later from the realization of the sexual attraction. While Travis is very confident, and very tired of the ‘femme fatale’ types, and is instantly drawn to Casey’s beauty, lack of pretention and brains, his mission is to get her to realize all that she is. Casey is incredibly insecure and unsure, her height, lack of experience and two failed romantic interludes led her to believe that she is incapable of competing at that level, wishing instead to be tiny and helpless.

As the two interact with witty repartee and a great sense of freedom that comes with those “vacation’ romances, the sexual tension and not so veiled innuendo flows freely. Narrated with a sense of the character’s personalities and allowing the rhythm of the written word to guide their delivery, the dual narrations of Destiny Landon and Lee James fit the characters beautifully, and the delivery helps to reinforce the emotions conveyed in the text, as clearly as if the reader / listener was in that situation. No one paces or crafts dialogue as well as Elaine Raco Chase, and the narrators do not miss a beat throughout the story, those natural pace changes in conversation, emphasis on specific words, trailing off softly in confusion – all performed with aplomb.

With a liberal addition of erotically tempting details and scenes that fit both the timing and the characters, the relationship arc moves in a solidly real trajectory, even as we know that Travis is instantly gobsmacked by everything about Casey. And, for those of us who want, no need that “happy ever after”, this has that, and more moments that will bring a smile to your face and a sparkle in your eye.

I received an audiobook copy from the author for purpose of honest review. I was not compensated for this review: all conclusions are my own responsibility.

Double Occupancy is a Winner!

Saying that Ms. Chase has a way with words certainly is an understatement. She can craft sentences in such a way that the reader is transported into the scene. Her descriptive manner of writing allowed me to have a wonderful movie of this book playing through my head while I listened to it. In addition, the story was interesting, entertaining, enticing, and delightfully naughty! The male and female narration added to the presentation, and the music that punctuated the book was an added bonus. I think you'll enjoy this one!

This was a fun book. Casey is escaping her life and goes to Mexico to work on her novel. Then Travis shows up. They are instantly attracted to one another, but she has too many insecurities to get involved right away. They become friends, but they find it impossible to stay that way for long. I enjoyed the fun banter, and of course there is lots of steam.

The narration is easy to listen to. There are two narrators and it makes the male and female points of view easy to distinguish. They both have very soothing voices. The music at the beginning of each chapter is a nice touch.

If you could sum up Double Occupancy in three words, what would they be?

The most interesting aspect of the story Double Occupancy, was how very real the characters were and how much two people could truly bring happiness to one another in such an unexpected roundabout way. How they met, how they merged into trusting one another, Casey's panic attacks that happened every single time a man tries to get close (which has happened to most women, when they have been burned by men they once trusted). Casey accomplished more in her career than a handful of men and women thrown together in a lifetime, however, in her personal life, she was a total wreck.

Double Occupancy was very well written, but even more well executed in the narration performed by female lead narrator Destiny Landon, and male narrator Lee James. I do really desire the female and male leads to be narrated by the specific genders, in particularly in romance novels. It always sounds goofy to me, to hear a male floating into a soprano voice in a futile attempt to mimic a female, and even more unnerving to hear the female drop a few octaves to imitate the males part.

The build up of this relationship was very real, very hot and my *** ONLY COMPLAINT *** would be that poor Casey was constantly sabotaging her relationship with Travis by second guessing every single feeling, action, and she even found something negative in silence. It was driving me mad to have her be so insecure, but as far as an audio book goes, the narrators did an excellent job at dragging the listeners into Casey's exasperating struggle with mostly herself. It was beautifully performed, although frustrating to listen to Casey's constant self doubt when freedom and love were at her fingertips.

What does Destiny Landon and Lee James bring to the story that you wouldn’t experience if you just read the book?

the narrators Destiny Landon and Lee James brought this book to it's highest potential.

I loved this audio book ... Casey and Travis played a great cat and mouse game. I could not put the book down. These two are so sexy together. I was so sorry to see their story end - it truly was a great love story which built up through the book. Their story is hot, passionate, funny, and definitely HOT HOT HOT!!! You will love this book ...I highly recommend it for a great night of reading! You will love all of Elaine's books - they just get better and better!!!

What made the experience of listening to Double Occupancy the most enjoyable?

I had read the Ebook and I loved it.. but this one was awesome.. the voices made the book come to life.. and I did not realise how hot and sexy it was until I listened...

Which character – as performed by Destiny Landon and Lee James – was your favorite?

You will Fall in love with Casey and Travis !!!

Elaine Raco Chase as an author YOU ROCK !!.. each of her books has a surprise.. all the characters are so believable and you come to love them...You will not be disappointed if you buy them

I couldn't even listen. I got 2 minutes into it and the male narrator's voice grated so badly and his narration was so terrible I had to stop. Punctuation is there for a reason, dude!!!

what odd cadence... couldn't get past it

what odd cadence... couldn't get past 3 minutes, which is too bad because premise sounded fun

I quit listening 4 hours in and there wasn't any sex! What a waste of time.

I really do hate to say anything negative regarding someone else's work, however the female leads manic episodes about love and her ability to make love became quite tedious and put the story on the corner of la la land and straight jacket blvd.

Not really looking good for that but I can't say no. I just hope her characters are normal everyday ones.

I gave the performance a three out of five. Nothing negative or positive about it. I just hope they did not have to go to a therapist when they were done.

I have listened to some books I didn't enjoy as much as others but I have never left a comment saying so. However with this one it was so hard to get through I just felt so bad the female lead really needed a therapist with the ranting and raving. It wasn't a bad plot it just had too much negativity coming from the female lead. I really got to the point where I felt like diving off of a cliff myself with this one. I wasted my money and my time. I NEVER feel like that.