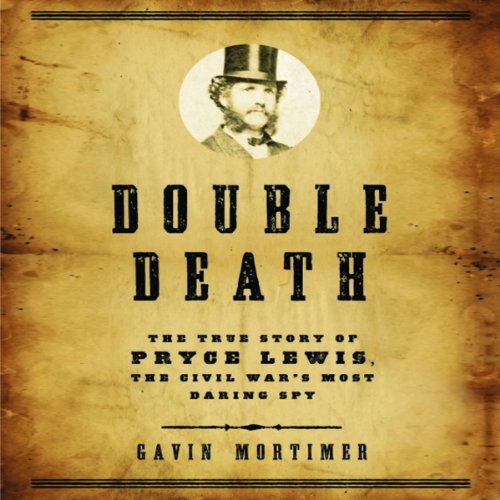 By: Gavin Mortimer
Narrated by: Patrick Downer
Try for $0.00

After an elderly man jumped from New York's Pulitzer Building, in 1911, his death made the front page of the New York Times: "WorldDome Suicide a Famous War Spy". By then Pryce Lewis had slipped entirely offstage; but, as Gavin Mortimer reveals, the headline did him justice, speaking to the dramatic, vitally important, and until now untold role he had played in the Civil War.

Emigrating to the United States in 1856, Lewis was soon employed as an operative by Allan Pinkerton in his newly established detective agency. Early in the Civil War Pinkerton offered the agency to President Lincoln as a secret service, spying on Southern forces and insurrectionists. Civilian spies proved crucial to both sides early on; indeed, intelligence gathered by Lewis helped give the Union army its first victory, three days after the defeat at Bull Run. Within a year, though, he and fellow Brit Timothy Webster, another Pinkerton operative, were captured in Richmond, and their high-profile trial and conviction in a Confederate court changed the course of wartime espionage. Lewis was spared the hangman's noose, but Webster was executed, and thereafter spying was left to military personnel rather than civilians.

Narrative history at its best, in recounting Pryce Lewis's gripping story, Double Death offers new angles on the Civil War, illuminating the early years of the Pinkerton Agency and the shadow world of spying throughout the war, as well as the often overlooked impact that Britain had on both sides.

What listeners say about Double Death

So I've read almost every book on the Civil War and Double Death taught me a whole bunch of stuff that I didn't know or that I didn't appreciate appropriately.

Pinkerton (yes, that Pinkerton) comes off badly and the "detectives" he employed come off as tragic figures, betrayed by incompetence. I read it straight through, yes all 12.5 hours, and had trouble getting up the next morning. Great read.