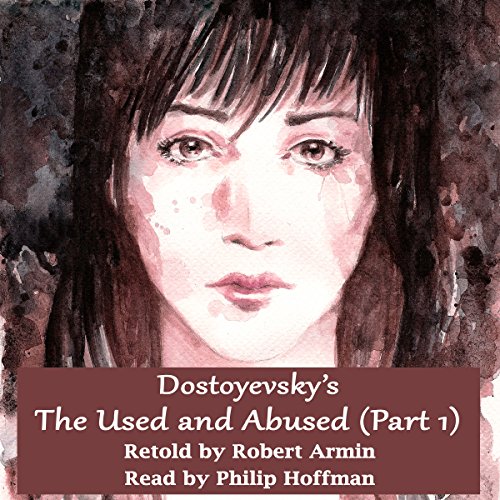 Dostoyevsky's The Used and Abused (Part One)

Dostoyevsky's The Used and Abused (Part One)

By: Robert Armin
Narrated by: Philip Hoffman
Free with a 30-day trial

Writing while he was serving time in a Russian prison, Dostoyevsky was heavily influenced by the novels of Charles Dickens. A frustrated love affair, an orphan girl in jeopardy, a scheming aristocrat, and an angry father who casts his daughter out of his life are just a few of the ingredients that make this lesser-known Russian novel a delight to hear.

More than simply creating a new translation, novelist and playwright Robert Armin has expanded upon and enhanced the characters and dialogue of Dostoyevsky's original work to give modern listeners a full and engaging listening experience from beginning to end. The audiobook is brilliantly performed by Broadway and television actor Philip Hoffman [Orange Is the New Black, Into the Woods (original Broadway production), Fiddler on the Roof (2004), A Catered Affair, and Cabaret (2014)].

This recording contains the first half of a two-part serialization.

What listeners say about Dostoyevsky's The Used and Abused (Part One)

Russian classic reworked - Better than nothing?

I am not sure what to say. I never read the original book and all Dostoyevsky's books have always intimidated me. I enjoyed the book, performance and story but always in the back of my mind was that I was "cheating" with Cliff Notes! The language and pace was in period mode and I will read the second book. Maybe this book was a good way to ease into the REAL thing. I was gifted this book by audioboom in exchange for an unbiased review.

Would you listen to Dostoyevsky's The Used and Abused (Part One) again? Why?

Yes, it had a complex cast of characters which made me gravitate towards hearing more.

Yes, I became entangled in the web of characters along with the interesting plot that it made it a worthwhile listen.

"I was provided this audiobook at no charge by the narrator in exchange for an unbiased review via Audiobook Boom."

For Fans of Dostoyevsky!

Where does Dostoyevsky's The Used and Abused (Part One) rank among all the audiobooks you’ve listened to so far?

The Used and Abused is on my "listen again" list for sure. The stories and characters are so complex and intricately presently that I'm sure there are some minute details that I missed during my first listen.

Ivan, the protagonist. He is so relatable and honest, and I enjoyed the unfolding of events from his perspective. I also really liked Elena, or Nellie as she prefers to be called at the end, but in Part One there is little revealed about her. The end of the book closes with a tiny sample of what Nellie's life has entailed in the past, which will be explored in the next audiobook. I am really looking forward to Part Two!

Philip Hoffman's performance is fantastic! You can effortlessly distinguish the different characters (and there are a lot of them), and his pronunciations and accents are wonderful!

There is a complicated love story in this book, and it grows more and more ridiculous that it becomes quite entertaining. Alyosha is enamoured by two women, and while is so passionate about both of them, he is just so simple minded and not bright at all. He handles his situations so poorly but with such vigour that is becomes unintentionally hilarious.

I highly recommend this book to fans of Russian literature and for those who like slice of life type stories. I am so pleased to have found this hidden gem by Dostoyevsky! I am not sure why it is not as popular as The Idiot or The Brothers Karamazov! Moreover, Philip Hoffman's narration is spectacular and I thoroughly enjoyed The Used and Abused. I cannot wait for Part Two to come out!

Lastly, this audiobook was given by the narrator at no cost in exchange for an unbiased review via Audiobook Boom.